The Maryland Department of Transportation Maryland Port Administration (MDOT MPA) has been awarded $703,116 in the most recent round of funding through the Federal Emergency Management Agency’s (FEMA) Port Security Grant Program. The funding, announced earlier this month, will help strengthening access control points and cybersecurity efforts at the Helen Delich Bentley Port of Baltimore’s state-owned public marine terminals. 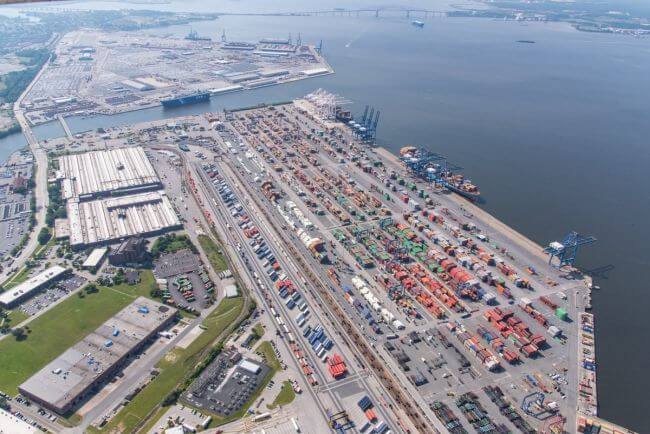 “As the Port of Baltimore continues to break cargo records and generate higher numbers of jobs, we want to make certain it remains one of the most secure seaports in the nation,” said Governor Larry Hogan. “This funding will help further our mission to ensure the security of the men and women who work at the Port, as well as the inbound and outbound cargo that comes through the Port.”

For 10 consecutive years, the Port of Baltimore’s public marine terminals have received a top rating on an annual security assessment conducted by the U.S. Coast Guard. The new FEMA allocation will be used for three specific projects to help make the Port’s security even stronger. One project will upgrade and add new security features to access control software that prevents unauthorized access to the public marine terminals. Another project will add three additional access control booths on the terminals. In the third project, MDOT MPA will incorporate additional mechanisms and upgrades to its cybersecurity platforms.

The Port of Baltimore generates about 15,330 direct jobs, with more than 139,180 jobs overall linked to Port activities. The average salary for people with direct jobs at the Port is 9.5% higher than the average annual wage in Maryland, and the Port is responsible for nearly $3.3 billion in personal wages and salaries, $2.6 billion in business revenues and $395 million in state and local tax revenues.

In 2018, a record 43 million tons of international cargo was handled by the combined state-owned public and privately-owned marine terminals at The Port. The value of the cargo in 2018 was also a benchmark: $59.7 billion. Last year the state-owned public terminals handled a record 10.9 million tons of general cargo and 1,023,152 twenty-foot equivalent containers, the first year ever exceeding one million. The Port also handled a record 850,147 cars and light trucks in 2018, the most in the U.S. for the eighth consecutive year.

The 43 million tons in 2018 placed the Port of Baltimore 11th among major U.S. ports for cargo handled, and the $59.7 billion total cargo value ranked ninth nationally. Among the nation’s ports, the Port of Baltimore ranks first for autos and light trucks, roll on/roll off heavy farm and construction machinery, imported sugar and imported gypsum. The Port ranks second in exported coal.