During the past quarter, the total maritime cargo turnover of Port of Antwerp fell by 3%, bringing the situation back to normal following the record figures of the first quarter in 2018. As the quarter unfolded, the total maritime cargo turnover again showed an upward trend. This trend is expected to continue in the coming months, also thanks to extra MSC cargo between Antwerp and Northern Europe starting in April.

Container traffic continues to grow, with March 2019 as the strongest month ever in terms of containers.

Container traffic: the strongest month of March ever

Container traffic put in a strong month in March, and even outperformed the month of March 2018, the previous best month ever. 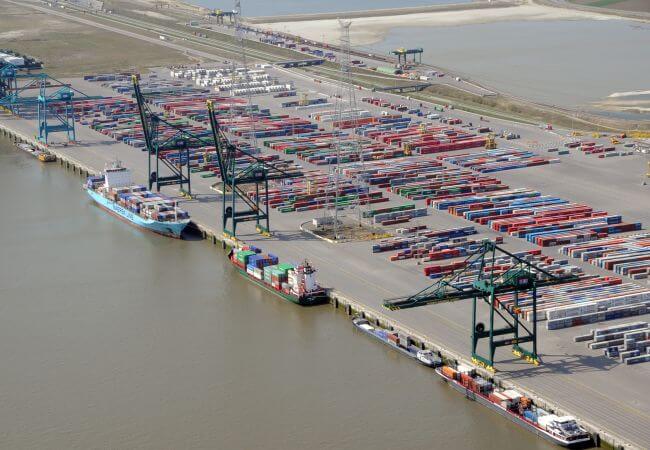 The container market share (in tonnes) of Port of Antwerp rose to 27.5% in 2018, or an increase of 0.7%. This allows Port of Antwerp to post the highest increase in the Hamburg-Le Havre range. Net growth amounted to 650,000 TEU.

Jacques Vandermeiren, CEO of the Port Authority, explains: “Our container throughput continues to grow despite the weakened economic outlook. This is good news for Port of Antwerp and consolidates our excellent position as a container cargo hub in the global logistics chain.”

Breakbulk: slight decline on the artificially high first quarter in 2018 due to US levies

Conventional breakbulk did rather well in the first quarter of 2019, but moderately well compared to the exceptional first quarter of 2018, driven by the build-up of steel stocks in anticipation of US import levies. As a result, iron and steel transhipment remained 5% below last year’s level.

RoRo transhipment was up 3.2%. Despite the decline in the number of rolling stock units, the number of tonnes went up thanks to the average weight per vehicle, especially in the utility vehicle category.

Liquid bulk: recovery in March after a weak January and February

Liquid bulk recorded a decline of 8.6% in the first quarter. After two weaker months (-12.4%), March showed a marked recovery, albeit less pronounced for petroleum derivatives, the largest segment within liquid bulk. A mild winter in 2019 versus a colder one in 2019 has an impact on the transhipment of petroleum derivatives. Also, the slowdown in the growth of the EU economy had implications for production volumes and energy demand, as did the evolution of crude oil prices.

Of particular note was the recovery in the transhipment of petroleum and chemicals. After three months, crude oil transhipment remains unchanged with 0.1%. Chemicals remain virtually unchanged (-0.6%) and saw a nice recovery in March following a sharp decrease in January and February.

Annick De Ridder, the alderman for the Port, concludes: “We can look back on a strong first quarter with continued growth in container traffic. These figures confirm the role of Port of Antwerp as one of the main economic pillars of the country and as a major employer. To secure the future prosperity of our port, we urge Flanders to proceed soon with the approval of the draft preference decision on container handling capacity.”

Port Of Antwerp Reports Growth Despite Eventful 2021
Appeals Raised Against Dismissal Of Charges On Bocimar For Scraping Vessel In Bangladesh
19 Port Authorities Sign Declaration On Disruption, Digitalisation And Decarbonisation
Watch: Port Of Antwerp To Attempt World’s First Conversion Of Tugboat To Methanol-Propulsion