Port of Oakland officials said today they’ve commissioned new equipment bolstering efforts to curb diesel emissions from ships. The Port OKd a high-voltage cable system that will connect more vessels to Oakland’s landside power grid. The Port said the breakthrough will accelerate the program that has helped cut emissions 76 percent in Oakland since 2009.

“We’re continually working to reduce emissions,” said Chris Chan, the Port’s Director of Engineering. “This is a way to build on our success and extend our reach.” 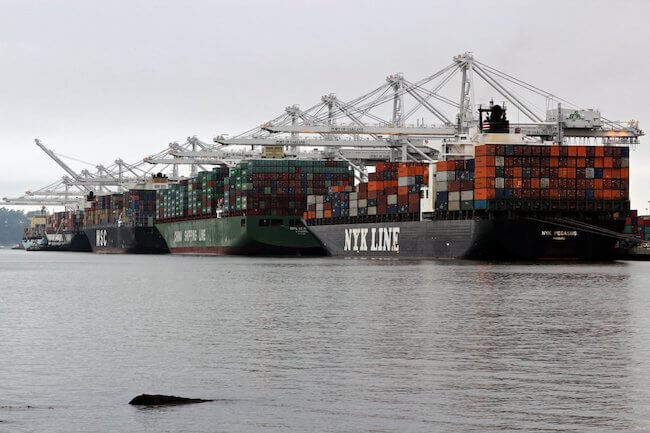 The Port said the 200-foot cable-on-reel system will be deployed by Oakland International Container Terminal. It will connect to ships that can’t closely align with landside electrical vaults at berth. When the ships plug into the vaults, they’ll switch off onboard diesel engines and rely on grid power. The result: no diesel emissions during Oakland calls.

The Port said nearly 400 vessels are equipped to plug into Oakland’s landside electrical system. The problem: ships sometimes berth beyond the reach of their onboard power cables.

That’s where the terminal’s new $230,000 cable system comes in. Its 10-foot-tall reel is affixed to a trailer. The mobile platform can be deployed alongside any vessel. The cable will connect ships to one of the marine terminal’s 18 shorepower electrical vaults.

The Port said its engineers have overseen two successful trials of the mobile cable system. It said it expects the technology to be deployed full-time by autumn.

Shorepower is one of a series of steps employed to reduce ship emissions in Oakland. The others include: