On 4th April, the Montreal Port Authority (MPA) and its clients celebrated the 50th anniversary of the arrival of the first containers at the Port of Montreal, a milestone in supply chain history.

In 1967, the Port of Montreal handled its first container. In 1968, it inaugurated the first Canadian container terminal, and Manchester Liners Ltd launched a weekly container transport service to the United Kingdom. 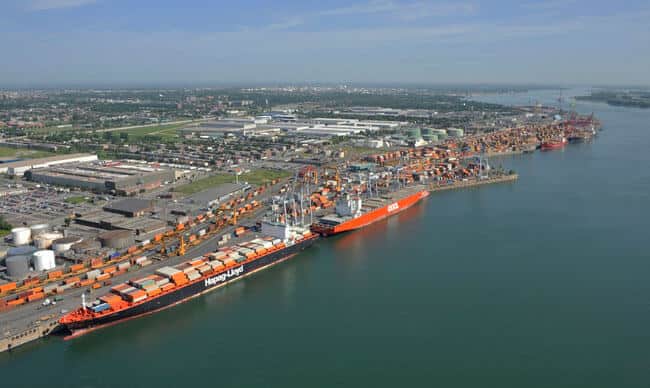 In 1967, the Port of Montreal handled more than 11,300 TEU (Twenty-foot Equivalent Unit) containers for a single shipping line. In 2016, the Port handled 1,447,566 TEUs for six shipping lines. In the past fifty years, nearly 35 million TEUs have transited through Montreal’s port facilities.

Today, the Port of Montreal is the only container port on the St. Lawrence River and the largest port in Eastern Canada. It has five container terminals. Nine regular services operated by global leaders in marine shipping connect Montreal to over 140 countries. Goods such as food products, fresh produce, electronic equipment and forestry products that are transported by container through Montreal mainly originate from, or are destined to, Northern Europe, Asia and the Mediterranean.

“In this year of festivities for Montreal and Canada, I am pleased to celebrate the 50 years of containerization that forged our history. Containers are literally in our DNA at the Port of Montreal. It’s what sets us apart and it’s our strength, right on par with the great diversity of cargo that we handle. Like a magnet, the Port of Montreal attracts companies and services that benefit from its presence, and that’s why the logistics industry is so important in Greater Montreal, and I would like to thank all the workers at the Port, the shipping lines, the supply chain stakeholders and all levels of government for their contribution to our success.”

“To address growth in the container market, we inaugurated the new Viau terminal in 2016 and we are working on our project for a new container terminal at Contrecœur, ensuring the future of container handling for Montreal and the whole of Quebec.”

Sylvie Vachon, President and CEO of the MPA

“The arrival of the first container at the Port of Montreal in 1967 marked a major turning point in the methods of freight transport on our roads. Every day, the Quebec trucking industry transports thousands of containers to and from the Port, through Montreal and Quebec to Eastern Ontario and the northeastern United States. Under the leadership of the Port of Montreal and industry leaders, a series of technological innovations are being unrolled to continuously promote the flow of traffic on our roads.”

Marc Cadieux, President and CEO of the Quebec Trucking Association

“Montreal is part of our developments in Canada. As an illustration, we will offer to our customers a new direct service to the Mediterranean with extensive and fast connection to West Africa and the Middle East effective from May 2017. Other major projects involving Montreal are presently under study. Congratulations to the Port of Montreal on this special anniversary.”

“The ties between the Port of Montreal and CN since the first half of the 20th century have always been tight. Every day, our container trains enter and leave the Port of Montreal, enabling both our organizations to provide reliable, efficient and secure transport to our markets in Canada and the United States.”

“CP has been operating in the Montreal area for more than 135 years and has had a strong relationship with the Port of Montreal over that time. We were there when the first containers arrived 50 years ago, and we remain here today at this essential transportation hub. It’s an honor to celebrate this milestone with the Port of Montreal, especially given our history in this location with CP Ships and the history of our company in Montreal.”

“Our family company started its operations at the Bickerdike pier in 1931. Over the years, we have seen numerous improvements in the maritime business amongst which, the very first containers in Montreal. Despite the fact that we now operate in 9 major ports across North America, for us, it all started here at the Port of Montreal over 85 years ago, and we are always proud to mark the event!”

“There is a very special relationship between the Port of Montreal, Hapag-Lloyd and its home base, the Port of Hamburg. Back in late 19th century, Hapag’s vessels were already sailing between Germany and Canada, carrying goods and people. Nowadays, we operate a weekly container carrier ship service to the city.”

“Maersk Line is proud of our long-term relationship with the Port of Montreal, and we complement you on the 50th anniversary of the first container arriving in the city. We are happy to be a partner with the port in connecting Canada to the world.”

“MGT is owned by a local investor consortium comprised of Axium Infrastructure, the Desjardins Group, Manulife, Industrial Alliance and the FTQ Solidarity Fund. It operates two of the four international container terminals at the Port of Montreal. The Port of Montreal’s oldest international container terminal still operating, CAST, is owned by the consortium and has been in operation since 1972. The consortium also owns the Racine Terminal, which has been in operation since 1978. Annually, both terminals handle hundreds of thousands of containers, reliably supplying businesses and industries throughout the country.”

“Each week, Oceanex ships connect the Ports of Montreal and St. John’s, Newfoundland and Labrador. Automobiles, trailers, and containers filled with a wide range of products and commodities, coming from origins throughout North America and around the world, are consolidated at the Port of Montreal and transported to Newfoundland, providing an essential, reliable, and efficient supply to the Province’s market.”

“This anniversary has a very special meaning to our history at OOCL when the first semi-container vessel was deployed to Montreal in 1967. This marked the beginning of our support and enduring relationship with the Port of Montreal and the community, setting the foundation of OOCL’s Montreal Gateway services that we continue to operate today in providing competitive weekly services connecting Montreal to markets in North Europe as well as those in Asia through our Eurobridge network. We are very honored to be one of Montreal’s vital links to world trade.”

“Termont has been operating Maisonneuve Terminal since 1988. In November 2016, we also inaugurated the last of the Port’s four international container terminals, Viau Terminal. Every week, our company is proud to ensure the efficient and safe handling of containers brought here by ships calling at the Port from the four corners of the world.”

MAN Energy Solutions and KONGSBERG Sign MoU For Collaboration On Common Data Infrastructure
Want to share your tips and advice? Got questions? Visit the community forum to ask questions, get answers, meet people, and share your tips!