Mayor Eric Garcetti and Long Beach Mayor Robert Garcia are strengthening their pledge to make the twin ports of the San Pedro Bay global models for cleaner air, sustainability and innovation. They also reaffirmed their commitment to adopting the Paris Climate Agreement goals in their cities, and highlighted the two ports’ critical role in achieving them.

The two mayors signed a joint declaration today that sets ambitious goals for the Ports of Los Angeles and Long Beach to make the transition to zero emissions in their Clean Air Action Plan (CAAP). The mayors also affirmed that the CAAP will include new investments in clean technology, expanding at-berth emission reductions, and launching a zero emissions drayage truck pilot program in the next few years. 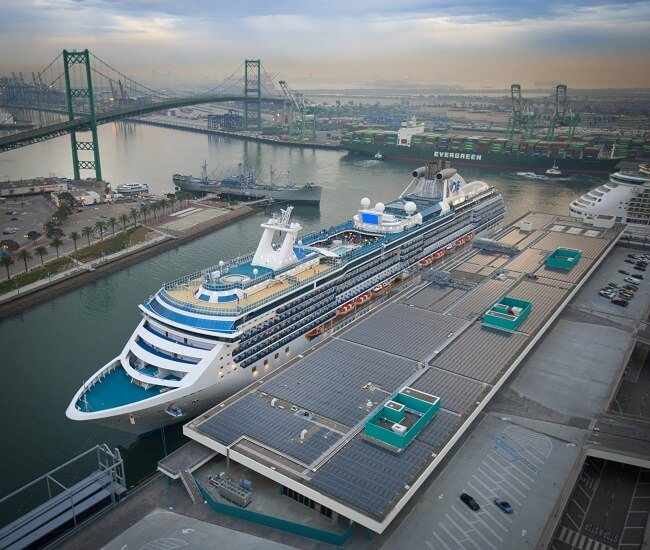 “Our ports are the engines that power our economy — they must also be the forces that drive our region toward a greener, more sustainable future,” said Mayor Garcetti. “I am proud to stand with my fellow Climate Mayor Robert Garcia today, as we renew our commitment to cleaning our air, and moving boldly toward our goal of zero emissions goods movement at the ports.”

“With the Ports of Los Angeles and Long Beach ranked as the nation’s two largest ports, it is crucial to double down on our commitment to combating climate change by achieving the goals of the Paris Agreement and by committing to zero emissions goals for the Clean Air Action Plan,” said Mayor Robert Garcia. “The success of our Ports has proven that you don’t have to choose between the environment and the economy. I look forward to working with Mayor Eric Garcetti and making our cities models for climate action.”

The Ports of Los Angeles and Long Beach will release a detailed timeline and process for CAAP within 15 days, and fully complete the update by November.

Mayors Garcetti and Garcia also launched the Green Ports Collaborative, a new initiative led by the Climate Mayors. The program will bring cities and ports together — first along the West Coast, and then across America — to create shared environmental standards, demonstrate future demand for zero emissions equipment and trucks, work with manufacturers to produce the vehicles and technologies needed, and take other collaborative action to green ports across the country.

Nearly 40% of the container cargo that comes to the U.S. moves through the Ports of Los Angeles and Long Beach. The ports generate $398 billion of economic activity every year, and they support one out of every nine jobs in the region. Both cities have demonstrated a firm commitment to making their ports more sustainable, and since 2006, the Clean Air Action Plan (CAAP) has led to dramatic emissions reductions — even as trade volume has increased 7%.

Today’s declaration is just one of the steps that Mayors Garcetti and Garcia are taking to create a more sustainable future for their cities.

In Los Angeles, Mayor Garcetti developed the city’s first ever Sustainable City pLAn, a comprehensive roadmap that lays out measurable long-term goals for efforts like creating green jobs, expanding the use of electric vehicles, and reducing greenhouse gas emissions across the city.

Mayor Garcia is leading Long Beach’s Climate Action and Adaptation Plan that will create a city-wide inventory of greenhouse gases and set targets for reduction to take a scientific approach to improving our environment, while continuing to reduce emissions by expanding solar energy on city facilities and rethinking mobility to lessen its impact on area residents.

And both Mayors Garcetti and Garcia are Climate Mayors — a group Mayor Garcetti co- founded in 2014 to organize mayors across the U.S. who are committed to fighting climate change in their cities. The group, which now includes 292 mayors who each committed to adopting the Paris Agreement goals in their cities. The Climate Mayors represents more than 60 million Americans, and has quadrupled in size since the President announced U.S. withdrawal from the Paris Climate Agreement earlier this month.