You are here: Home › Shipping News › Port of Kiel Invests In a Cleaner Baltic
TwitterFacebookLinkedInPinterestBuffer

The new facility, which cost well over € 1.8 million, serves as a model and increases current waste-water reception capability tenfold to as much as 300 m³ an hour. Dr Dirk Claus, Managing Director of the PORT OF KIEL (SEEHAFEN KIEL GmbH & Co. KG) said: “We are investing in a cleaner Baltic. This capacity increase is Kiel’s contribution to marine protection and meets regulatory demands which are not even due to take effect until 2021.” The first ships to take advantage of the new waste-water reception facility were “Mein Schiff 3” and “Mein Schiff 6”which called this morning. All the countries on the Baltic have agreed that from the year 2021 all cruise ships – indeed new ships from as early as 2019 – must dispose of all their waste-water in port and can only do so on board ship when regulatory standards are adhered to. 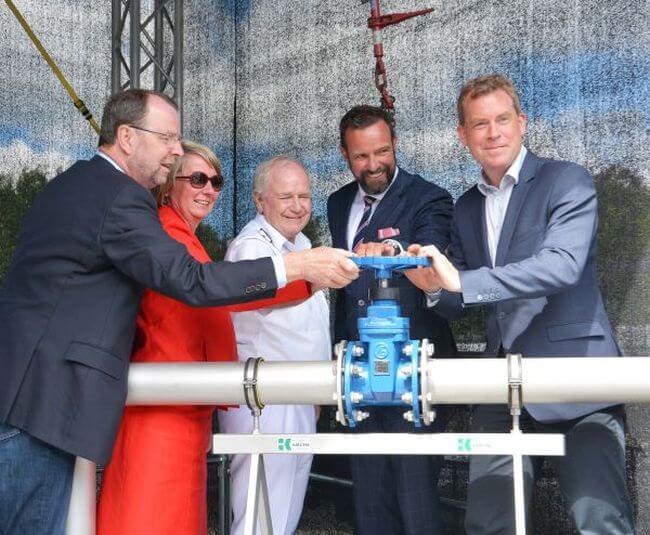 Kiel’s new waste-water reception facility has been built at the Ostseekai Cruise Terminal in the space of just six months. Several hundred metres of pressure resistant pipes of 225 mm diameter, as well as eight junction points, have been laid parallel to the ship berths. The pipes flow into storage containers, located north of the terminal, which have capacities of up to 75 m³ and are fitted with waste-water analytical and treatment technology. By using compressed air and adding ozone the water is aerated in fine stoneware pipes. If required the pH value of the water can be regulated by feeding in sodium hydroxide solution.

“We carried out intensive tests last year with the firm of Unitechnics to determine the best processing method”, said Dirk Claus, “and we have as a result created new standards”. The compressed air connections are fully sealed while filters and adsorbers eliminate hydrogen sulphides in the facility itself. Cleaned exhaust air is discharged through a chimney. The treated ship waste-water is finally pumped into compressed air pipes newly laid below the Prinzengarten and Jensendamm and leading to the municipal delivery point. From there it is fed to the city sewage works in Bülk and cleaned. 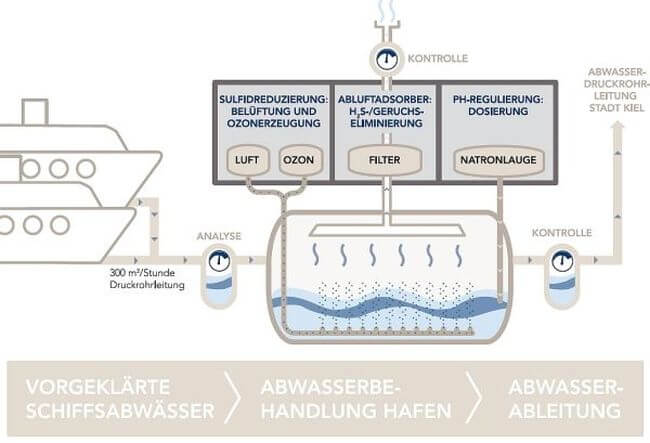 The ships of owners AIDA Cruises, Phoenix Seereisen and TUI Cruises already regularly offload their waste-water on shore: last year it totalled well over 10,500 m³. At the Ostseekai Terminal, the volume requirements of the cruise shipping companies for the handling of up to 200 m³ an hour are now being totally complied with. “With the new facility we are taking on a pioneering role”, said Dirk Claus. “There is hardly any other port that can as yet handle such large volumes of waste-water from ships”, he added. The PORT OF KIEL expects that nearly all the cruise ships that berth at the Ostseekai Terminal will in future discharge their waste-water there.

Cargo Ships Discharge Part Of Their Waste Into The Baltic Sea

The Baltic Sea Mystery of the Strange UFO Object