The largest container ship to call in North Europe so far has made its maiden call at the Port of Felixstowe.

The 20,568 TEU Madrid Maersk, operated on the 2M NEU2 Asia to Europe service, has arrived at the port with over 6,000 TEU for the UK loaded in China and Malaysia. 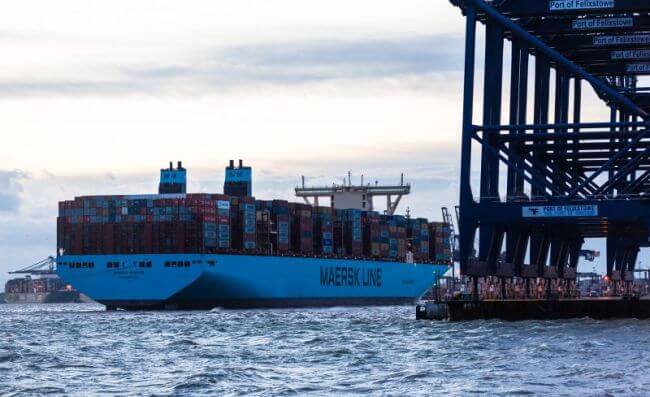 Commenting on the latest in a long line of record-breakers to call at the UK’s largest container port, Clemence Cheng, Chief Executive Officer of the Port of Felixstowe and Managing Director of Hutchison Ports Europe, said:

“The Port of Felixstowe is firmly established as the port of first-choice in the UK for the largest mega ships. We were the first in the UK to handle this latest class of vessel and continue to offer the widest and most frequent range of services on the major Asia – Europe trade.”

Built by South Korea’s Daewoo Shipbuilding & Marine Engineering, the Madrid Maersk is 399 metres long, has a beam of 58.6 metres and is the first of Maersk Line’s 2nd generation Triple-Es, known officially as the EEE Mark II. The original Triple-Es have been regular callers at Felixstowe since 2013. Delivery of the remaining 10 Triple-E Mark II’s is expected to take place between now and the middle of 2018.

“With this maiden call of Madrid Maersk, we have yet another opportunity to celebrate our good cooperation with the Port of Felixstowe”, shares Brian Godsafe, Managing Director UK & Ireland, Maersk Line. “As the latest addition to our modern fleet, this new vessel continues our commitment to serve our customers around the world in an even more efficient, environmentally-friendly and sustainable way.”

The 2M service has called at Felixstowe since its inception in January 2015. In addition to its core members, Maersk Line and Mediterranean Shipping Company (MSC), capacity is also now offered on 2M sailings by Hamburg Sud and Hyundai Merchant Marine.