The Port also experienced slight increases in cruise passengers and petroleum volumes according to unaudited reports. 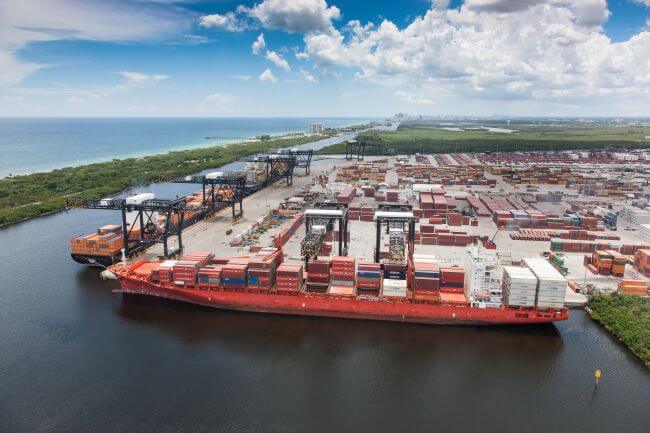 The containerized cargo increase represents a 4 percent boost compared to FY2016, and a 1.5 percent increase since the last record was set in FY2015 at 1,060,507 TEUs. Growth was steady throughout the year and spiked with record months in December and March.

“The volumes of refrigerated produce coming into Florida through Port Everglades from Central America is significant. It represents more than half of all perishable cargo that arrives in Florida by ocean,” said Port Everglades Chief Executive and Port Director Steve Cernak. “Apparel, tile and beverages also rank among our top commodities. Notably, we are seeing growth in machinery and automobile parts as the number of vehicles being shipped in and out of the port also increases.”

Operating revenue for FY2017 remained steady at $163 million. As a self-supporting Enterprise Fund of Broward County, Florida government, the Port does not rely on local tax dollars for operations. The total value of economic activity related to Port Everglades is nearly $30 billion. More than 222,000 Florida jobs are impacted by the Port, including almost 13,000 people who work for companies that provide direct services to Port Everglades.

“Port Everglades is an economic generator for Broward County and Florida that delivers financial stability and jobs in our community,” said Broward County Mayor Barbara Sharief. “This record year is a positive indication of Broward’s commitment to the businesses that choose to locate here.”

USCG To Offload 14,000 Pounds Of Cocaine In Port Everglades