A new class of post-Panamax (PPX) shipping vessel made its first visit to Port Canaveral, marking the second time this year a vehicle carrier megaship of this size has called on the Port. Launched in 2017, the MV Donington PPX roll-on/roll-off (Ro/Ro) vessel arrived at Port Canaveral as part of its inaugural U.S. itinerary. 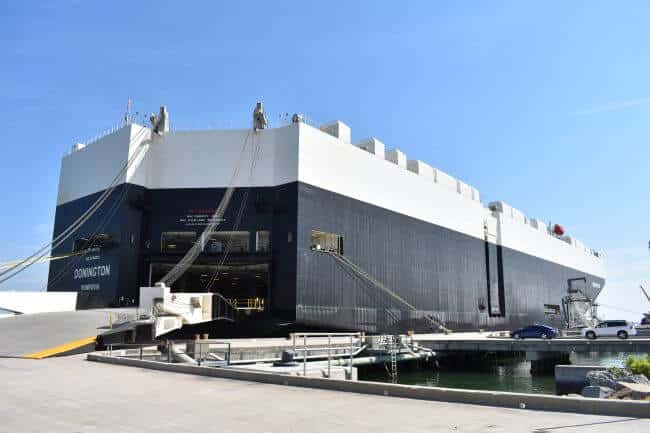 With its 125-foot beam and capacity to transport over 7,400 vehicles, the Donington is Hoegh Autoliners’ largest Post-Panamax vessel to call on the Port. The ship arrived at Port Canaveral, its second U.S. port of call after delivering vehicles to Port Freeport in Texas last week.

“The arrival of the MV Donington underscores the important role Port Canaveral plays in supporting the economic growth in the Central Florida region,” said Port CEO Captain John Murray. ”The improvements we’ve made to berth infrastructure, our channel and turning basin have enhanced our ability to handle increased cargo volumes coming into the region. Megaships like the MV Donington calling on the Port highlight our competitiveness in the global marketplace.”

MV Donington was built in 2017 and is 199.96 meters (656 feet) long with a beam of 38 meters (125 feet) wide. The massive vehicle carrier with its 18,241 DWT (dead weight tonnage), discharged 460 new vehicles at the AutoPort Canaveral, LLC facility at Port Canaveral before departing for Jacksonville, Florida.