This project builds upon a strong relationship between WCMRC and Robert Allan Ltd., which included providing guidance to assess recently built spill response skimming vessels and providing technical assistance to bring these into Canadian registry. Recently, this also included providing market studies evaluating available existing vessels, which could be converted for spill response duties, and the design of two large spill response barges, for which the construction contracts are expected to be awarded later this year. 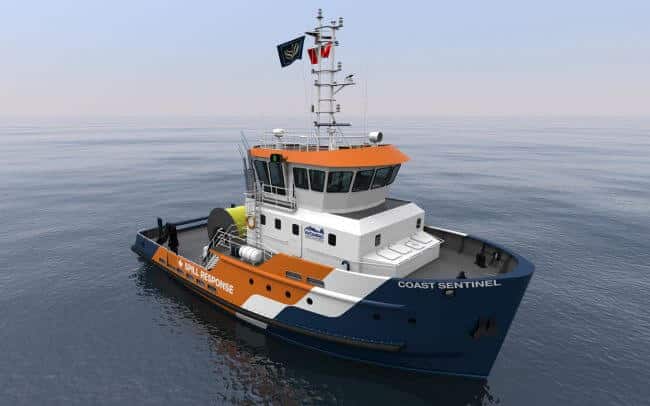 With WCMRC’s aim to increase their offshore spill response capability for the Trans Mountain pipeline expansion project Robert Allan Ltd. was awarded a design contract by WCMRC in late 2016 for the BRAvo 2500 vessels. Through a highly collaborative process working in person with WCMRC, the best possible solution to meet their response requirements was assessed and incorporated into the design of these vessels.

Identified as Coastal Response Vessels by WCMRC, these modern pollution response platforms were custom designed to meet the formidable environmental conditions and demanding requirements of Canada’s exposed west coast. They will act as a mothership to other smaller vessels during training exercises and in the response to a spill, should it occur. They will be capable of deploying leading containment technologies, transferring equipment between vessels, and provide WCMRC the flexibility of utilizing the vessel’s internal tankage or offloading any oil into WCMRC’s barges. 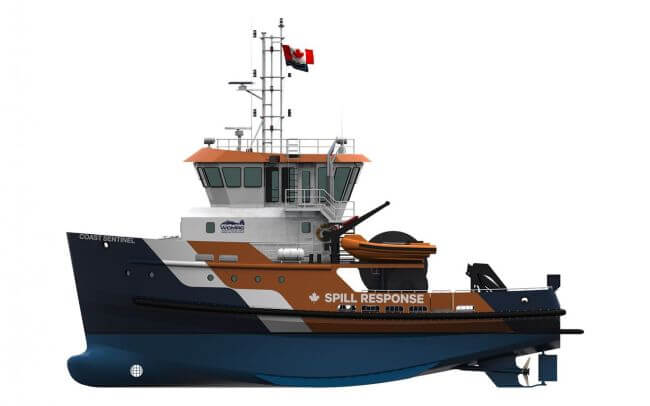 Particulars of the BRAvo 2500 pollution response vessels are as follows:

The hull form, which features a bulbous bow, was extensively studied by Robert Allan Ltd. with computational fluid dynamics and will allow the resiliently mounted EPA Tier 3 compliant Caterpillar C9.3 main engines to propel the vessel at a speed of at least 10 knots. Two Caterpillar C4.4 ship service gensets, in sound enclosures, will provide electrical power for vessel services, including the deck machinery.

A spacious deck aft is equipped with 2500 ft. of Kepner self-inflating offshore containment boom stored on a large powered reel and a NOFI Current Buster 4 sweep system, which can be deployed and towed by the Coastal Response Vessel to capture oil in current and waves. These booms are deployable over an aft roller to minimize wear during training exercises and an aft swim platform allows easy access to the water surface for recovering and deploying equipment with the vessel’s crane. This platform will also ease the transfer of spill responders from small workboats with limited freeboard. 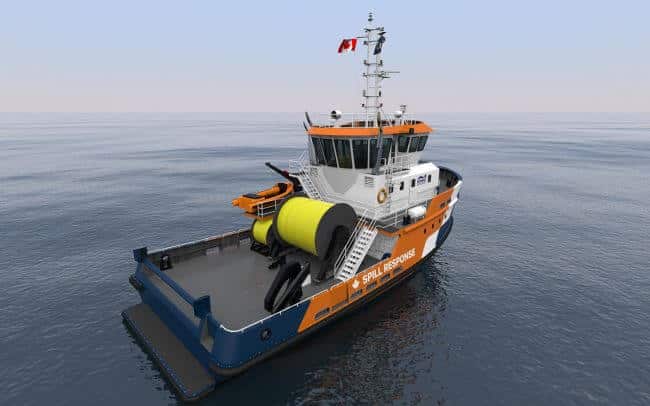 On the main deck, large lockers for handling loose spill response equipment are provided along with a large wet gear entry space to deal with the west coast’s extremely wet climate. The entry space can be used as an internal decontamination area during a spill. Crew accommodations are also arranged on this level, featuring a generously sized mess, galley and crew rooms. With the deckhouse above, which includes two large cabins and an office, the vessel is designed to accommodate 8 people in quiet MLC compliant cabins, satisfying all Transport Canada regulations. The wheelhouse provides exceptional all around visibility, especially to the aft deck to allow the master to actively manoeuvre the vessel using its twin screw propulsion and the bow thruster while still supervising the deployment and recovery of spill response equipment.

Due to the harsh environmental conditions, significant effort was spent during the design to reduce the vessel’s motions in waves to the maximum extent possible. This included implementing Robert Allan Ltd.’s unique hull sponson technology from the incredibly successful RAstar series of offshore escort tugs, as well as large bilge keels, twin skegs and a bulbous bow. The vessel’s stability was also assessed to optimize rolling period and not only satisfy regulatory requirements, but also implement Robert Allan Ltd.’s recommendation for one compartment damage survivability. 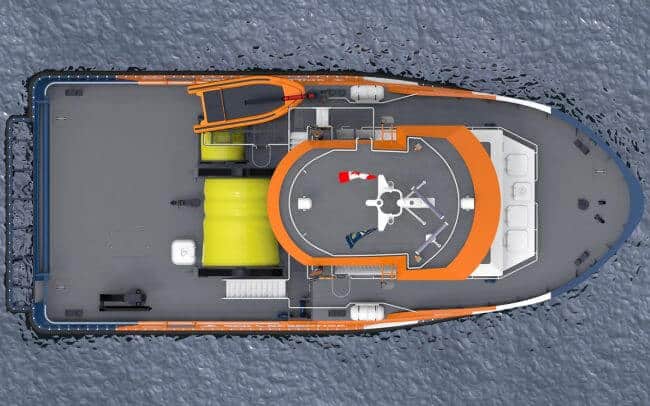 These innovative BRAvo 2500 Pollution Response Vessels, custom designed to support WCMRC’s spill response operations in demanding weather operations, are truly the state of the art in compact pollution response vessel design today. They will provide a safe and comfortable platform for WCMRC crews to standby while conducting their regular training exercises and play a critical role in ensuring a speedy response, should a spill occur. Robert Allan Ltd. congratulates WCMRC and ASL on the successful contract signing and looks forward to these advanced vessels protecting the pristine coast our staff is honoured to call home.