You are here: Home › Shipping News › Polarstern Returns From The Arctic After A Five-Month Journey
TwitterFacebookLinkedInPinterestBuffer

On Wednesday, 14 October 2015 the research icebreaker Polarstern from the Alfred-Wegener Institute, Helmholtz Centre for Polar and Marine Research (AWI), entered its homeport in Bremerhaven. Since mid-May, over 200 biologists, physicists, chemists, ice physicists, oceanographers and geoscientists have taken part in a total of four expeditions, with changes of personnel in Longyearbyen (Spitsbergen) and Tromsø (Norway). In the course of these five months, Polarstern covered over 16,000 nautical miles (more than 30,000 kilometres).

Climate change is proceeding especially rapidly and intensively in the Arctic. Over the past few decades, the mean temperature in the High North has risen twice as fast as the global average. In order to investigate how the environment is reacting to this change, researchers from the Alfred Wegener Institute make regular forays into the higher latitudes, where they maintain e.g. a deep-sea observatory – the AWI “Hausgarten” – and a long-term time series based on oceanographic buoys. Over the last few months, the scientists gathered data there and replaced a number of instruments. 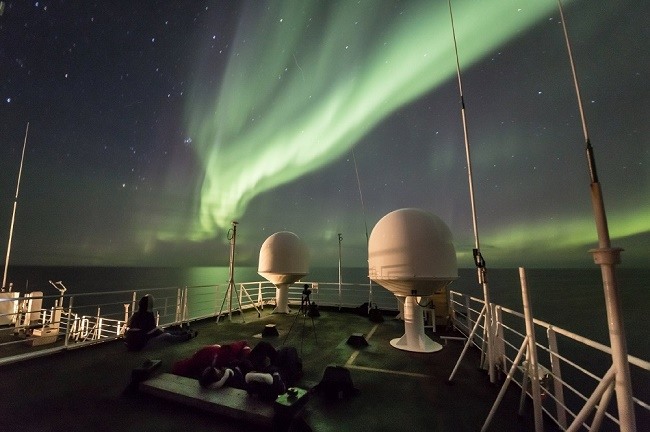 This summer, the three- to eight-week expeditions took AWI researchers to the Fram Strait between Svalbard and Greenland, and to the central Arctic. On 7 September 2015 Polarstern reached the North Pole, which the ship had first visited together with the Swedish icebreaker Oden in 1991, then with the American icebreaker Healy in 2001, and on its own in 2011 and 2014. This year the ship happened upon the Healy – a chance meeting the researchers took advantage of by conducting comparative chemical tests, and through mutual visits to exchange notes.

To better understand the changes at work in the Arctic, the national and international teams that participated in the four expeditions included experts from all marine research disciplines. The teams investigated changes in temperature and freshwater, and in ice-ocean circulation; they also measured the thickness of the sea ice and analysed micropollutants and microscopic algae (phytoplankton) and animals (zooplankton) suspended in seawater, as well as various plants, animals and bacteria that live in and on the seafloor and in sea ice.

In addition to conventional measuring instruments like nets, water samplers, sensors and buoys, the expedition teams also employed remote-controlled and autonomous underwater robots. Measuring systems for determining sea-ice thickness and snow cover, meteorological parameters, and the temperature, salinity and bio-optical properties of the ocean were installed on ice floes, where they will transmit their data back to the researchers by satellite throughout the year as they drift through the Arctic. Further, a new multicopter took off on its maiden flight in the Arctic, navigating a preprogrammed course that brought it safely back to its developers. In the future, it will help to better monitor the drift of sea ice.

RV Polarstern is expected to arrive in Bremerhaven at high tide Wednesday afternoon. Over the next two weeks it will undergo routine maintenance and repairs in the Lloyd shipyard, before leaving port for the Antarctic season on 29 October 2015.