‘How to create better shipping for a better future’ was a theme running throughout the 2018 IMO World Maritime Day Parallel Event (13-15 June), held in Szczecin, Poland.

“IMO’s heritage for 70 years has been to drive improvements in shipping to achieve a better world today. But we cannot rest on past achievements. Our challenge for the years to come remains the same: to create better shipping – for a better future,” said IMO Secretary-General Kitack Lim, in his keynote address.

The international audience was welcomed by Mr. Marek Gróbarczyk, Minister of Maritime Economy and Inland Navigation of Poland, and the importance of the event was recognized in remarks in a letter from Mr. Andrzej Duda, President of the Republic of Poland, presented by Mr. Paweł Mucha, Secretary of State, Deputy Chief of the Chancellery of the President of the Republic of Poland. 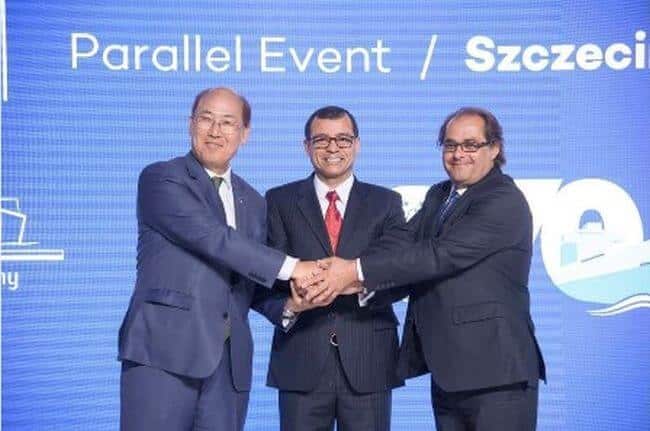 Following the opening session, delegates heard high-level speakers on a range of topics, including: IMO70: Looking back/Looking forward; the Future of Shipping; Green and Smart Shipping; Big Data and Cyber Security in Shipping; Shipping in the Face of New Transport Routes; and the Future of the Maritime Labour Market.

Participants also heard about the Polish maritime economy and visited the President Lech Kaczyński LNG Terminal in Świnoujście and the Szczecin Świnoujście Seaport. In addition, delegates attended a reception aboard the Polish sail training ship Dar Młodzieży just before it departed on a round-the-world cruise to celebrate the 100th anniversary of the independence of Poland, another theme running through the parallel event.

During the closing ceremony, a commemorative plaque was presented to Mr. Gróbarczyk, Minister of Maritime Economy and Inland Navigation of Poland, by Secretary-General Lim.

Ministers highlighted the historic adoption in April of the initial IMO strategy on the reduction of GHG emission from shipping and looked ahead to the next stage, considering candidate measures to implement and achieve the strategy. They also emphasised that the forthcoming 1 January 2020 reduction in the limit of sulphur in fuel oil to 0.50% (from 3.0%) would not be delayed and that this was an important measure for human health and the environment.

There was a fruitful exchange of views on the “fourth industrial revolution”, as it impacts the maritime sector, including increasing digitalization, the internet of things and artificial intelligence. IMO is already addressing related matters, including maritime autonomous surface ships and cybersecurity. Ministers also discussed and highlighted the continued need, now and in the future, for capacity building and technical cooperation, to ensure global effective implementation of IMO standards.