You are here: Home › Shipping News › Pirates Kidnap Six Crew And Kill One Off Philippines
TwitterFacebookLinkedInPinterestBuffer

On 20 Feb 17, the ReCAAP ISC received report from the Focal Point (Vietnam) about an abduction incident occurred on a Vietnam-registered ship, Giang Hai. At about 1724 hrs on 19 Feb 17, the bulk carrier while underway from Indonesia to IIoilo Port, Philippines, when in the vicinity of 35 nm north west of Doc Can Island, at 06°8.0’N, 119°24’E, an unidentified number of pirates boarded the ship and abducted six crew members (Master, Chief Officer, 3rd Officer, 2nd Engineer and one oiler); and shot one crew (sailor) to death.

Of concern, this is the second incident involving abduction of crew in 2017, and the first time that a crew was shot to death. The ReCAAP ISC is deeply concerned about the situation of abduction of crew from ships while underway in the Sulu-Celebes Sea region. It reiterates its advisory which was issued via the ReCAAP ISC Incident Alert dated 21 November 2016 to all ships to re-route from the area, where possible. Otherwise, ship masters and crew are strongly urged to exercise extra vigilance while transiting the area.

All vessels are advised to report to the Philippine authorities and Eastern Sabah Security Command (ESSCOM) prior to entering or passing the Sibutu Passage and Sulu-Celebes Sea. Concerning the reporting centres in the Philippines, NavyLittoral Monitoring Stations(LMS) based in Bongao, Tawi Tawi, is included in addition to the Philippine Coast Guard District Southwestern Mindanao Operation Centre based in Zamboanga.

The contact details and location of the reporting centres are as shown below. 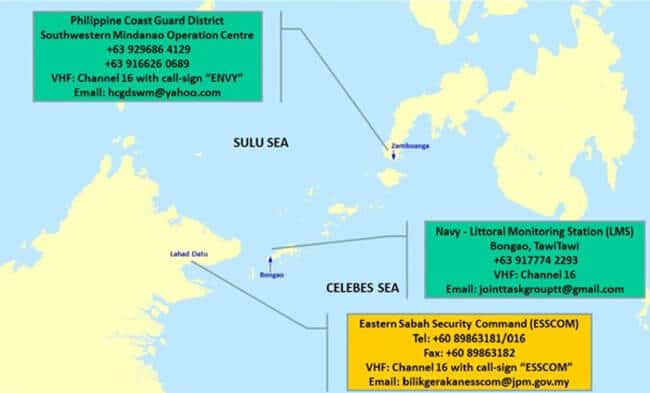