During 24-30 Dec 19, three actual incidents of armed robbery against ships in Asia were reported to ReCAAP ISC. One was a CAT 31 incident and two were CAT 42 incidents. The CAT 3 incident occurred to a ship while anchored at Panjang Customary Anchorage, Lampung, Sumatra, Indonesia.

The two CAT 4 incidents occurred to ships while underway in the eastbound lane of the Traffic Separation Scheme (TSS) in the Singapore Strait. The location of the incidents is shown in the map below; and detailed description tabulated in the attachment.

1 CAT (Category) 3 incident is ‘less significant’ in nature. Under this category, the perpetrators could be armed with knives/machetes or other items such as sticks or rods. 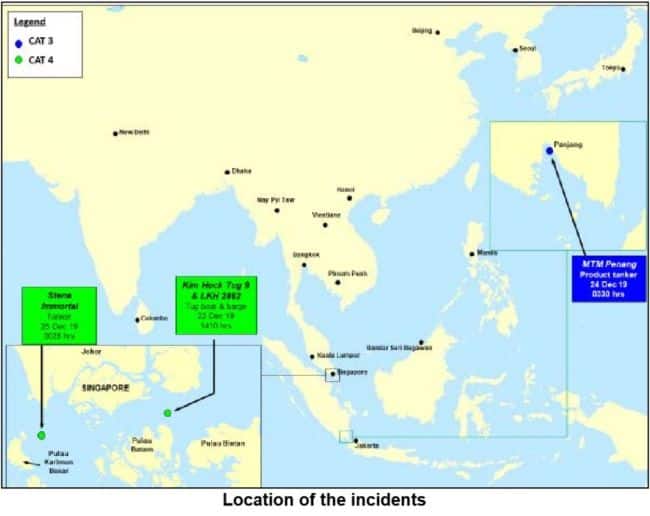 The crew was not harmed although there remains a small possibility that the crew could be subjected to duress or threat during the incident but not harmed physically. In most CAT 3 cases, the perpetrators were unable to steal anything from the vessel, but in cases where losses were reported, stores and engine spares were commonly targeted items.

2 CAT (Category) 4 incident is classified as ‘least significant’ in nature. Under this category, the perpetrators were not armed, and the crew not harmed.

Concerning the incident on 25 Dec 19 that occurred in the eastbound lane of the Traffic Separation Scheme (TSS) in the Singapore Strait, the ReCAAP ISC had issued an Incident Alert 09/2019 on 25 Dec 19.

The ReCAAP Focal Point (Singapore) reported to the ReCAAP ISC an incident occurred to a Singapore-registered bulk carrier in the Gulf of Guinea, Nigeria on 30 Dec 19. The ship was underway to Port Harcourt when a suspected pirate skiff pursued the ship. There was an exchange of gunfire between the Nigerian armed guards on board the ship and the pirates. The pirates eventually aborted the pursuit and fled.

As the risk of the abduction of crew in the Sulu-Celebes Seas and waters off Eastern Sabah is high, ReCAAP ISC reiterates its advisory issued via ReCAAP ISC Incident Alert dated 21 Nov 16 to all ships to reroute from the area, where possible. Otherwise, ship masters and crew are strongly urged to exercise extra vigilance while transiting the area, and report immediately to the Operation Centres of Philippines and Eastern Sabah Security Command (ESSCOM) of Malaysia. The contact details of the Operation Centres of the Philippines and ESSCOM of Malaysia (updated by ReCAAP ISC on 3 Jan 19) are as follows: 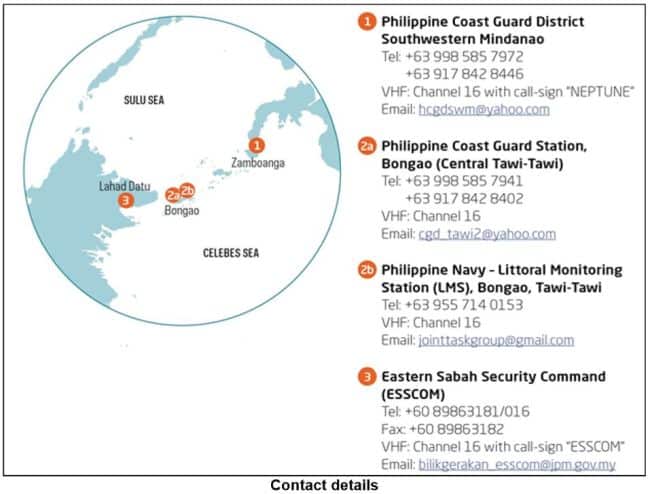