Gulf of Guinea pirates continue to disrupt shipping and the recent kidnapping of the Turkish crew of a container ship has again put things into perspective.

This time the pirates have contacted the shipping company to discuss the ransom for the 15 kidnapped sailors.

According to the statement, “information has been obtained that all 15 crew members are in good health, not wounded and together”.

The pirates have killed an Azerbaijani crew member and kidnapped 15 Turkish crew members during the raid, revealed the statements issued by the government. 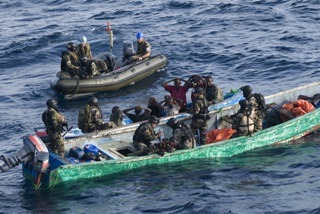 Eye witness from the incident like crew, security sources and family members of the crew revealed that this was a well-orchestrated sophistication attack done with explosives.

Meanwhile, shipping agencies and ITF has urged for government actions as the water has gone above its head as seafarers are being killed in piracy attacks now

The seafarer killed in the attack was Azerbaijani engineer Farman Ismayilov

The Turkish President Tayyip Erdogan’s office said that the government will organise a rescue attempt and ITF thanked Turkey for such efforts.

“We thank Turkey for their attempts to rescue the surviving crew but West African governments also must act to stop the deaths of more seafarers off their coastlines,” said Heindel

“Our hearts go out to Farman and his family. Authorities must act together to stop further raids on seafarers in the Gulf of Guinea,” he said.

Seafarers Life in Danger Without Action

ITF Seafarers’ Section Coordinator Fabrizio Barcellona have expressed concern over government failures to protect seafarers in the Gulf of Guinea.

“This severity of this latest attack must now drive robust action from government to protect seafarers and the movement of trade around West Africa. Governments need to make good on their commitments to deter pirates with a strong naval and coastguard presence,” said Barcellona.

“Without immediate action, more seafarers risk being shot and killed. The Gulf of Guinea is becoming a ‘bay of blood’”, Barcellona added.