“Scarlet Lady”, the first of four ships which Virgin Voyages (new cruise operator and a brand part of Sir Richard Branson’s Virgin Group), ordered to Fincantieri, was presented today at the shipyard in Genoa Sestri Ponente.

The ceremony was attended, among others, by the President and CEO of Virgin Voyages Tom McAlpin, by the Governor of the Liguria Region Giovanni Toti, by the Mayor of Genoa Marco Bucci, welcomed by the Chairman of Fincantieri Giampiero Massolo, and its CEO Giuseppe Bono.

“Scarlet Lady” weighs about 110,000 gross tons, is 278 meters long and 38 wide. Virgin Voyages second ship, “Valiant Lady”, currently under construction in the same yard, will be delivered in 2021, while the third and the fourth units, still unnamed, will set sail respectively in 2022 and 2023. 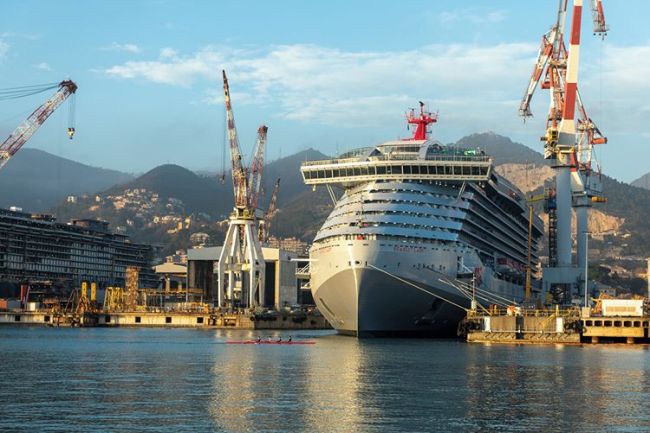 They will all feature over 1,400 guest cabins designed to host more than 2,770 passengers, accompanied by 1,160 crew members on board to deliver the famed Virgin service.

The quality of life on board is guaranteed by the “comfort class” certification, testifying minimum levels of noise and vibration, as well as by extensive use of home automation.

Thanks to this, by installing an app on their smartphones, guests are able to manage a wide range of cabin functions (air conditioning, lightening, opening and closing of blinds, music, and television).

The development of “Scalet Lady” stands out for her design, as well as for the particular attention paid to energy recovery, featuring cutting-edge alternative technologies that reduce the ship’s overall environmental impact.

For example, the ship is equipped with an energy production system of approximately 1 MW, which uses the diesel engine’s waste heat.

In addition to a scrubber system for the waste management of sulfur dioxides, the new unit is also fitted with a catalytic converter, which reduces nitrogen oxides. “Scarlet Lady” is entirely equipped with led lights to reduce energy consumption, while the hydrodynamic design of the hull provides excellent performance with consequent fuel saving.