After taking a closer look at the hit-and-run case by Hong Kong cargo ship Vienna Wood at Occidental Mindoro, The PCG has now confirmed the filing of a criminal case against the shipping company ‘Nomkios Transworld Maritime’, its master, and the officers aboard on the 6th of July, Monday.

Filing it at the Provincial Prosecutor’s Office, Commodore Armand Balilo, the spokesman of the Coast Guard says that the move was made to determine a cause.

The Philippines Coast Guard, led by Lieutenant Valerie Lagua, who is the station commander filed a case of “reckless imprudence resulting in multiple homicide and damage to property” referring to the 14 missing Filipinos and sinking of fishing vessel Liberty 5.

The search and rescue operation of the missing 14 mariners continued for 5 days with no sign of life near the collision site. Commandant Vice-admiral of the PCG is however of the opinion that the chances of finding survivors post 3 days of the accident are slim and the retrieval operations are to focus on rescuing victim bodies.

The discovery of the sinking vessel 2,000 meters in the ocean later changed the operation to retrieval operations which have now been extended until Tuesday, 7th July. 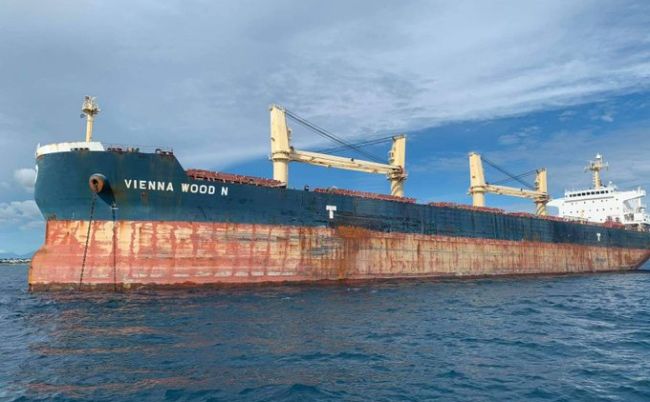 The accused carrier is currently at a halt, retained at Port of Batangas. The filed complaints consist of the names of respondents, primarily officers and the master. They are:

The collision accident has been reported to have happened on the 28th of July 2020, after Hong Kong-registered bulk carrier ‘Vienna Wood’ collided with Philippines vessel ‘Liberty 5’.

The impact of the collision apparently led to the boat capsizing, unable to save itself even though it well-equipped.
Even though the vessel had appeared on their radar, the carrier did not appear to deploy any sort of rescue team to assist the victims, placing them accountable for the incident.

Blaming it on choppy waters, Vienna Woods crew master defends the actions stating that the heavy rain would’ve made lowering a lifeboat dangerous and that the vessel was focusing on steering away from 7 smaller vessels that came to aid of Liberty 5. This incident has been mentioned among similar accidents in the past, labelling it as “harassment” to Filipinos, as per Defense Secretary Delfin Lorenzana.

Since the collision occurred around Occidental Mindoro and its coastline, in Philippine internal waters, the Philippine jurisdiction has undertaken this investigation. Foreign Secretary Teodoro Locsin Jr. has stated that the accident is not to be politicized as it is most likely that it was an accident.

AMVER Awards Continue Despite Ongoing Medical Situation
Want to share your tips and advice? Got questions? Visit the community forum to ask questions, get answers, meet people, and share your tips!