A floating liquefied natural gas facility (FLNG), which is expectected to be the world’s first in operation, has been named at a ceremony held by PETRONAS, together with strategic partners Daewoo Shipbuilding and Marine Engineering (DSME) and Technip at DSME shipyard in Okpo, South Korea. PFLNG SATU is the first FLNG ordered by Malaysia’s state-owned oil company Petronas and to be classed by DNV GL. After its delivery this spring, it will be deployed in the Kanowit gas field offshore Sarawak in Malaysia, where it is expected to produce up to 1.2 million tonnes of LNG every year.

Mr. Sung Leep Jung, President & CEO of DSME in his speech said, “This ship is the perfect example of everything Daewoo has learned and every technology we have developed in the LNG sector since 1992. FLNGs are a new alternative that will change the existing game in the industry. This achievement, coupled with HSE record of 17 million hours of No Lost Time Injuries is indeed a significant feat for the partnership.” 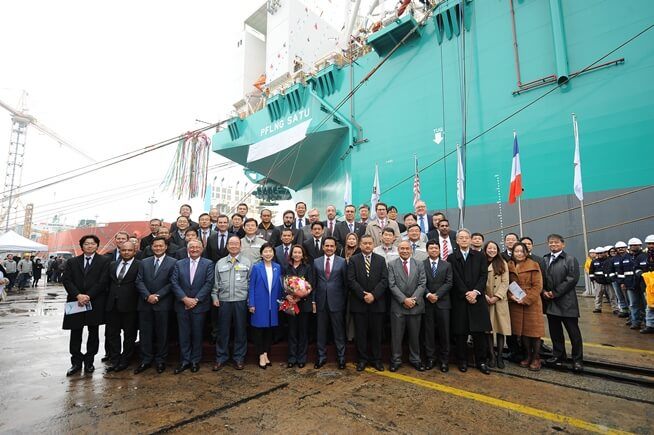 “The PFLNG SATU is a testament to the engineering capabilities of PETRONAS and its partners signifying a breakthrough achievement not only for the company but also for Malaysia. Today, we have pushed the boundaries and turned our technological aspirations of having an LNG plant on a floating vessel into reality,” said Datuk Wan Zulkiflee Wan Ariffin, PETRONAS President and Group CEO in a press release issued by the company at the ceremony.

“We are very pleased to being part of this technical achievement and milestone as well as of the safe and successful completion of the project. This will add to the already long list of reference projects where DNV GL is in the forefront and moves the boundaries of proven technology,” added Tommy Bjørnsen, Regional Manager of Korea & Japan.

PFLNG SATU is 365 metres long and 60 metres wide, with a LNG tank capacity of 177000 m3, distributed into 8 tanks in dual row. The unit will be classed by DNV GL with the notation + OI Ship-shaped LNG Production and Storage Unit, POSMOOR, HELDK, COMF-V(2).