Peel Ports Group, owner of the Port of Liverpool, has pressed the button on the second phase of its expansion programme at Liverpool2, already one of the world’s most modern shipping terminals. The company is to invest in equipment and port infrastructure works to expand the terminal and introduce further leading-edge port technology solutions.

This latest phase will include the installation of a further three ship to shore cranes (STS) and 10 cantilever rail mounted gantry cranes (CRMG). These will add to the previous five STS cranes and 12 CRMG cranes installed as part of Phase 1 which was opened in November last year. Liverpool2 will have the capacity to manage the unloading of two 380m vessels simultaneously. 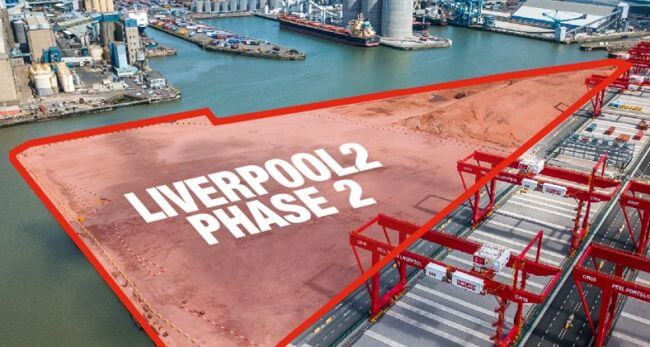 There will also be additional reefer points installed to allow the terminal to handle even greater quantities of refrigerated containers at the Port of Liverpool.

Launched in November 2016, Liverpool2 represents a £400m investment that provides a state-of-the-art ocean gateway for international trade to and from the UK. The deep water facility is capable of accommodating the world’s largest container vessels and connects road, rail and canal networks linking directly to the heart of the UK mainland, accessing a catchment of over 35 million people, almost 58% of the UK’s population.

Mark Whitworth, CEO of Peel Ports said: “This is an important step in the development of Liverpool2 and reflects our confidence and our long term commitment to positioning the North of England as a competitive route to international markets and a major port for global trade.

“The development of the project programme is now well underway. We are currently preparing the outline designs and would look to be in a position to appoint construction partners in spring of next year, with a view to commencement of construction shortly after. We anticipate a completion date for Phase 2 in 2019.

“The world class facilities which we have at Liverpool2 will allow us to capture and grow a greater share of the container market, offering cargo owners in the north of the country a more competitive route to market, getting their goods closer to their end destination.

“We are in a good place in our discussions with shipping lines; there are more opportunities on the horizon at the Port and our confidence is high as a result.”

Peel Ports Group announced earlier this year that it had secured over 200 signatories for its Cargo200 initiative – a campaign calling on importers and exporters whose goods are destined for the North of England to switch delivery of ocean-freight from south-east ports to the Port of Liverpool. The port operator evidenced that by making the change, UK plc will save around £400m a year as well as cut inland freight mileage by 200 million miles by 2020.