The last five years have been one of the longest and most challenging downturns the offshore industry has ever experienced. Since the oil price drop of 2014/2015, the Offshore vessel market has been plagued by bankruptcies, consolidations, takeovers and mergers, forced fleet sales and most importantly a significant decrease in asset values.

VesselsValue has always been conservative in terms of Offshore asset values compared to their competitors. In January 2019, Solstad Offshore were requested to revalue their fleet by Norwegian financial authority Finanstilsynet. At that time VesselsValue estimated the value of a five-year-old large PSV at USD 13.7 mil, down almost 22% year to date from USD 17.5 mil. By comparison other valuation providers were quoting valuations 20% higher.

In the months that followed, others believed the value of a five-year-old large PSV increased from c. USD 16 mil to c. USD 19 mil. By comparison, VesselsValue figures increase from USD 13.5 mil to USD 14.1 mil.

There were very few transactions within the market during this period to support such an aggressive increase. However, the market was seeing some positivity, both a stable and relatively high oil price, vessel rates increasing, layup figures decreasing, and handful of ships sold for demolition.

The VV algorithms use a combination of long and short-term rolling averages of the Brent Crude oil price to model sentiment in the absence of transactions. This is effective because the VV sentiment does not overreact to any short-term knee-jerk effects witnessed in the market unless there are enough supporting sale and purchase transactions to justify this.

2019 was not a bad year for the Offshore industry, however VV has always argued based on their data, and valuations that the market was not experiencing the upturn others believed.

2020 has seen the Covid 19 global pandemic and a significant decline in oil price. Tuesday 21st April saw Brent crude drop below USD 16/barrel, a 21-year all-time low. To put this into perspective, the lowest recorded oil price in last crisis was USD 23/barrel.

On the 31st March 2020 Solstad Offshore announced they has entered financial restructuring, citing Covid 19 and the continued poor Offshore market conditions. Such a large Norwegian Offshore owner entering restructuring is an important milestone for the sector. As of 23rd April 2020 VesselsValue values the Solstad fleet at USD 1,483.9 bil. See below table.

A condition of Solstad’s restructuring deal is they must remove 37 vessels. Although the exact vessels to be sold are not yet known, it will most likely be the laid up, older smaller units.

Utilising VesselsValue fleet search and recency of AIS function, VesselsValue are able filter PSVs, AHTs and OCVs within the Solstad fleet that have not signalled in 1 week or more, i.e. are inactive / laid up. These 34 vessels could represent a large portion of the possible 37 sales candidates. The below table shows the inactive vessel breakdown:

If Solstad were to remove all the 34 outlined vessels from their fleet, the new VesselsValue fleet value would be USD 1,362.8 bil. See below: 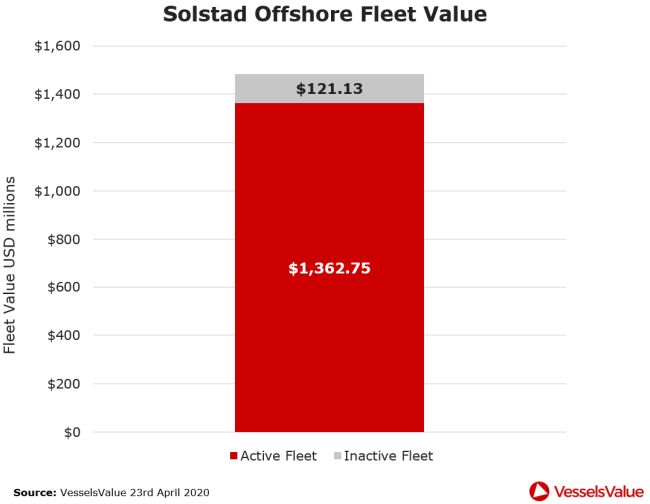 It is unknown how long this current economic situation will last, but what is known is that the Offshore industry is in retraction and the outlook will be extremely testing for everyone from oil majors to small service providers and all those in between. All signs points to another period of restructuring, forced vessel sales, mergers and consolidations and therefore declining asset values. As always with periods of austerity, data driven valuations are critical to keep the market moving forward and prevent it from making the same mistakes of the past.