On 2nd May, the Panama Canal welcomed the largest vessel both in dimension and capacity to transit the Expanded Canal since it was inaugurated in June 2016. The 13,092 TEU Neopanamax containership COSCO Development, which measures 366 meters in length and 48.2 meters in beam, began its voyage in Asia, and will soon become the largest ship to arrive on the U.S. East Coast when it calls at several ports there next week.

To put the scale of this enormous ship into perspective, its length is equivalent to the length of one Eiffel Tower or eight Statues of Liberty. 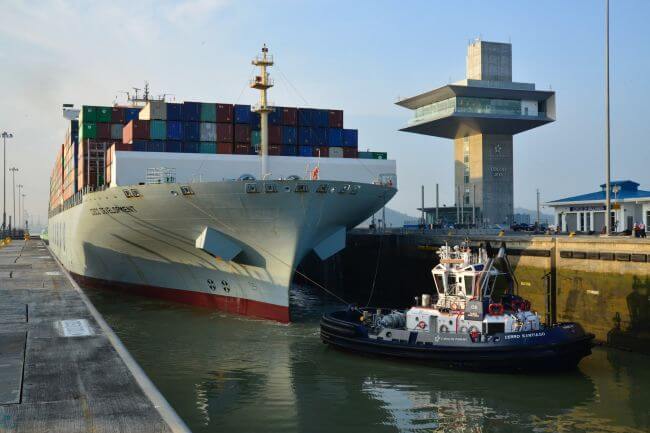 The vessel is deployed on the new OCEAN Alliance’s weekly South Atlantic Express (SAX) service, connecting Asia-US East Coast ports via the Panama Canal. The SAX service is comprised of 11 vessels ranging in size from 11,000 to 13,000 TEUs. The Alliance includes China COSCO Shiping, Orient Overseas Container Lines (OOCL), CMA CGM Group and Evergreen, which are among the Panama Canal’s top customers by volume.

In the days since its inauguration, the Expanded Canal has seen its Neopanamax traffic steadily increase. Thus far, the Expanded Canal has transited more than 1,200 Neopanamax vessels—an average of 5.9 vessels per day, when a daily estimate of two and three transits was initially forecasted for the first year of operation. In addition, a total of 15 new liner services have shifted to take advantage of the new route.

“Today’s milestone transit ushers in a new era of mega-ships transiting the Expanded Canal,” said Panama Canal Administrator Jorge L. Quijano. “This is yet another example of the Expansion surpassing our original expectations, which was made possible in part by our continued investment in the in-depth training of our Canal workforce.”

“Thus far, 15 Neopanamax liner services have redirected service to the Panama Canal to take advantage of all that the Expansion offers, and we expect even more to come in 2017,” said the Panama Canal’s Senior International Trade Specialist Argelis Moreno de Ducreux. “We’re seeing the majority of these liner services connecting ports in Asia and the U.S. East Coast, which are regions already seeing an influx in traffic due to the Expansion.”

Similar to the Panama Canal, ports along the U.S. East Coast have also set tonnage records this year. The Ports of Savannah, Charleston and Virginia—which the COSCO Development will call on next week—have seen strong performance, in particular, due in part to the investments they have made to accommodate larger vessels passing through the Expansion.

“Less than one year in, and the impact of the Expanded Canal is already evident across the world,” said Mr. Quijano. “As liners continue to reroute services and consolidate cargo on larger vessels, we look forward to welcoming the increase of Neopanamax traffic with the same safe, reliable service our customers have come to expect.”