On 29th April, the Expanded Panama Canal welcomed its first passenger vessel through the new locks: the Disney Cruise Line Disney Wonder. The milestone signals the further diversification of traffic through the Expanded Canal and with it, introduces new repositioning opportunities for the cruise industry and benefits to its customers.

“The original Panama Canal has been a cruise destination for many years,” said Panama Canal Deputy Administrator Manuel Benitez. “Today’s historic transit marks the beginning of cruise lines being able to include the new locks as part of their itineraries, opening up additional transit options and allowing cruise passengers to witness first-hand this feat of modern engineering.” 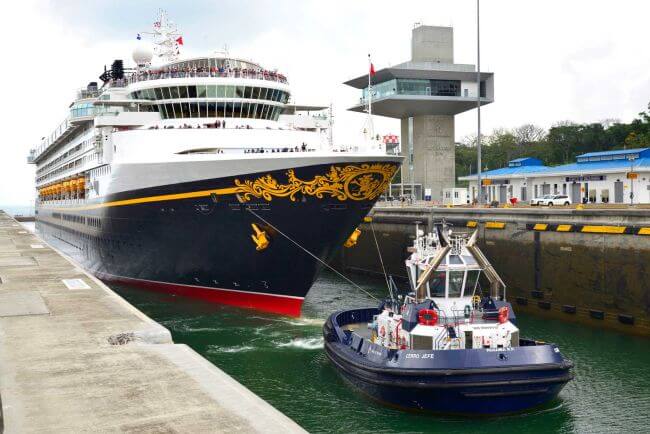 The Disney Wonder will transit the Expanded Canal in a southbound direction from the Atlantic to the Pacific Ocean. The Disney Wonder Panama Canal crossing is part of a 14-night voyage from Port Canaveral, Fla., to San Diego, where the ship will sail cruises to Baja, Mexico, before a summer season from Vancouver to Alaska. The Disney Cruise Line 2,713-passenger ship was transformed in late 2016, expanding the length of the Disney Wonder to 299.92 meters.

The Disney Wonder is one of several cruise ships to have transited the canal during the 2016-2017 cruise season that ends in May. Notably, the Disney Wonder’s transit on April 29, marked the first time a passenger vessel utilized the new locks of the Expanded Canal. Other lines such as Princess Cruises, Holland America Line, Royal Caribbean Cruises and Norwegian Cruise Line all sent passenger vessels through the original locks. In addition, smaller vessels, such as the Safari Voyager and National Geographic’s Sea Lion, which call on ports in the Caribbean and along the east and west coasts of Central America, contributed to the segment’s traffic as well.

By the close of the 2017 fiscal year, which ends September 30, Panama Canal International Trade Specialist Albano Aguilar expects 233 passenger vessels – representing a total 237,298 passengers – to have transited both the original and new locks.