The Panama Canal signed a Memorandum of Understanding (MOU) in Cuiabá, Brazil that will promote the Panama Canal’s position as a route for grain shipments traveling from northern Brazil to ports accessed in the Pacific Ocean.

The agreement, signed with the Association of Soybean and Corn Producers of Mato Grosso (Aprosoja), will allow the two groups to conduct joint marketing activities and exchange market studies and information on trade flows to support modernization and improvement programs. 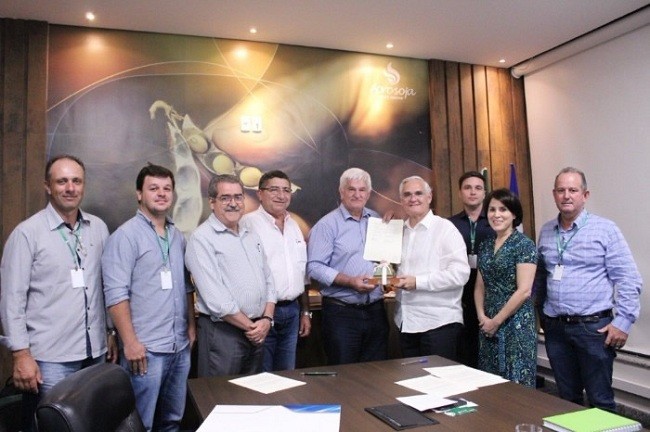 “The increased capacity afforded to us by the Expanded Canal has had far-reaching positive impact across segments, and allows us to access new markets, which could include freight from ports such as those in northern Brazil,” said Administrator Jorge Luis Quijano in Brazil. “The Panama Canal is proud to partner with this organization and unleash an exciting opportunity for Brazilian exporters.”

With this agreement, the Panama Canal looks to promote the use of the Panamax locks for soy and corn grain transits originating in northern Brazil and traveling to markets in Asia. These shipments typically transit on Panamax vessels given the similarity between the drafts in the Amazon River ports and the Panamax locks.
“As the Panama Canal continues finding new and innovative ways to address the ever-changing needs of the global maritime community and international trade flows, this agreement with the Mato Grosso Association of Soybean and Corn Producers further strengthens the common goal of promoting regional trade growth,” added Administrator Quijano. “This agreement allows us to maintain our commitment to serving our dedicated customers in an informed, strategic and practiced way, and better positions the Canal in its role as the logistics hub of the Americas.”

Partner group, Aprosoja, created in February 2005, is a non-profit organization comprised of producers linked to the soybean and corn crops in Mato Grosso, Brazil who work to create initiatives to drive sustainable growth in the sector. The agreement was signed by the president of Aprosoja, Antônio Galvan, and Administrator Quijano.

The MOU’s signing comes at a time when exporters of grains from Brazil are enjoying considerable increases in shipment volumes from the year before. Dry bulk, including grains, accounted for roughly 24 percent of the waterway’s total transits during its 2017 fiscal year. Since beginning its 2018 fiscal year on October 1 of last year, 21.6 percent of Panamax and 7.9 percent of Neopanamax transits have consisted of dry bulk.

The Panama Canal has signed MOUs with 36 commercial associations, ports and maritime organizations, the majority of which are in the United States. This agreement with a Brazilian organization is the first MOU between the Panama Canal and a Latin American country.

Administrator Quijano signed the agreement in Cuiabá, Brazil as a part of a broader visit to the country. During his trip, the Administrator spoke at the Logistics and Innovation Solution to Suit Forum in Recife, Pernambuco, Brazil.

GONDAN Launches New Hybrid Icebreaker Tug
Want to share your tips and advice? Got questions? Visit the community forum to ask questions, get answers, meet people, and share your tips!