Following the close of its 2017 fiscal year (FY17), the Panama Canal announced that the waterway welcomed a record 403.8 million Panama Canal tons (PC/UMS) of cargo in FY17, the largest amount of annual tonnage ever transited in its 103-year history. The 22.2 percent increase from the previous year can be directly attributed to the added capacity provided by the Expanded Canal.

According to figures, the Panama Canal transited a total of 13,548 vessels during its FY17, representing a 3.3 percent increase compared to totals the year before. Thanks to the larger Neopanamax vessels now able to transit the Expanded Canal, the growth in traffic translated into a 22.2 percent increase in total annual tonnage from FY16, and helped the Panama Canal surpass the already ambitious cargo projection of reaching 399 million PC/UMS. 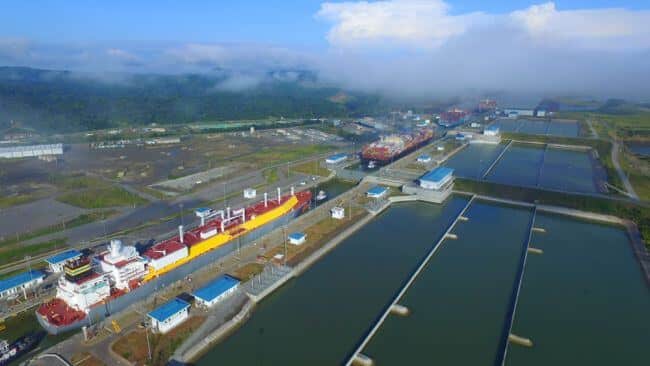 “This year’s success is a testament to the Expanded Canal’s success,” said Panama Canal Administrator Jorge L. Quijano. “These record figures reflect not only the industry’s confidence in the Expanded Canal, but also illustrate the Panama Canal’s continued ability to transform the global economy and revitalize the maritime industry.”

The record-breaking FY17 results include many important milestones for the Panama Canal. Less than six months after inauguration of the Expanded Canal, the waterway welcomed the YM Unity containership, its 500th Neopanamax vessel transit. In March 2017, Mediterranean Shipping Company’s MSC Anzu became the 1000th Neopanamax vessel to transit the Canal. The September 2017 transit of the COSCO Yantian containership marked 2,000 Neopanamax transits, including the Disney Cruise Line’s Disney Wonder, the first Neopanamax cruise ship to transit.

After setting similar records in December 2016 and May 2017, the Neopanamax containership CMA CGM Theodore Roosevelt became the largest ship to transit the Canal to date in August 2017, measuring 365.96 meters in length and 48.252 meters in beam with a Total TEU Allowance (TTA) of 14,863. The ship later traveled to the Port of New York and New Jersey for the inauguration of the raised Bayonne Bridge.

In September 2017, the Canal launched Panama’s Maritime Single Window (VUMPA), with other Panamanian bodies, to streamline logistics paperwork for international customers. To uphold sustainability efforts, the Canal created the Environmental Premium Ranking in October 2016 to reward qualified customers who meet high environmental efficiency standards with the opportunity to improve their position within the Customer Ranking System, which is taken into account when booking transits through the Canal. The Panama Canal also instituted modifications to the toll structure in response to a series of discussions with customers and a review of changing cargo patterns.

The container segment continued to serve as the leading market segment of tonnage through the Canal, accounting for 35.3 percent of the total cargo received. This equated to a total 143 million tons PC/UMS, of which 89.1 million tons transited the Expanded Canal. Tankers – which include liquefied petroleum gas (LPG) and liquefied natural gas (LNG) carriers – represented the following market segment (105 million PC/UMS).

Beyond Panama, the impact of the Canal was felt around the world.

The countries of China, Chile, Japan, Mexico and Colombia were some of the top users of the Panama Canal, while the United States continued to be the main user of the waterway representing the origin or destination for 68.3 percent of the total cargo transiting the Canal.

The impact of the Expanded Panama Canal was also apparent in many ports along the U.S. East Coast, which were able to welcome the larger Neopanamax ships from the Canal and saw increased growth. Some even set records in terms of their year-on-year growth and the total amount of tonnage received – all of which can be directly attributed to the widening of the Panama Canal.

Other ports recently completed, or are continuing to advance, a number of infrastructure projects that allow them to receive Neopanamax ships, as well.

Positioning the Canal for the Future

As the shipping industry continues to adapt to the Expanded Canal, the Panama Canal is working to bolster the capabilities of the waterway through various infrastructure projects aimed at providing greater connectivity and transshipment opportunities to the region. Specifically, the Panama Canal maintains plans to concession a roll-on roll-off (RoRo) terminal to serve as a center for the redistribution of vehicles, machinery and heavy equipment and a 1,200-hectares logistics park to further strengthen the logistics services in the region, among other projects.

“We look forward to maintaining our partnership with customers to deliver the same safe and efficient service for the next year ahead,” said Mr. Quijano. “Through our innovative and reliable practices, we continue to position Panama as the logistics hub of the Americas.”