Panama Canal announced the transit of its 3,000th Neopanamax vessel, exceeding initial traffic expectations by this date and reaffirming the value and impact its route has had on global maritime trade.

The Panamanian flagged containership MSC Caterina completed the milestone transit this morning traveling northbound from the Pacific to the Atlantic Ocean. The vessel measures 300 meters in length and 48 meters in beam, with a total TEU allowance (TTA) of 9,000 containers. It was one of nine Neopanamax vessels welcomed at the Panama Canal today. 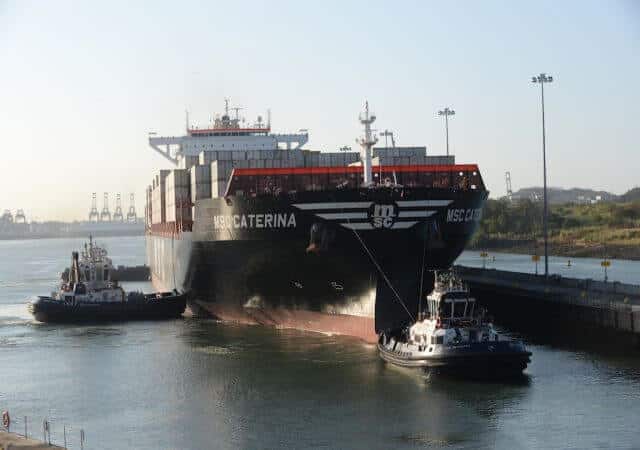 “Today’s milestone, achieved in less than two years of operation, serves as a proud reminder of the confidence that our customers and the broader maritime industry have placed in our route,” said Canal Administrator, Jorge Luis Quijano.

Since its inauguration on June 26, 2016, the Neopanamax locks have had a positive effect on economies of global scales by providing the shipping industry with greater capacity to transport cargo between production centers and consumer centers, using Neopanamax vessels.

Of the 3,000 vessels that have transited to date, roughly 53 percent have been from the container segment. Liquefied petroleum gas vessels constitute another 28 percent, and liquified natural gas carriers, a relatively new segment to the Panama Canal, have been responsible for 10 percent of traffic. Dry and liquid bulk carriers, car carriers and cruise ships make up the remaining transits.

Other notable transits thus far include the MSC Anzu, which became the 1000th transit on March 19, 2017, and the COSCO Yantian which later registered the 2,000th transit on September 26, 2017.

Reflecting on the strong adoption of the waterway, Mr. Quijano added: “We at the Panama Canal remain committed to providing a safe, reliable and efficient service for our customers. We look forward to the next 3,000 vessels and beyond.”