Earlier this year, the Panama Canal implemented water-saving measures after experiencing the fifth driest year at the Canal in 70 years. 692 to the long-standing partnership with our customers and their flexibility to adapt to these measures, the Panama Canal has now emerged from its dry season equipped to ensure a competitive draft and thus steady operations for months to come.

Having an operational level of water and transit reliability in the second half of 2020 will be critical for the waterway as it advances its search for long-term water solutions and prepares for coronavirus-driven shifts in trade, as the Panama Canal Administrator outlined earlier this month.

The waterway has carefully monitored its operational water usage since the end of 2018 when rainfall at the watershed was 20 percent below the historic average. This unprecedented drought severely constrained water levels at Gatun and Alhajuela Lakes, the main sources of water for the Canal and half of Panama’s population. 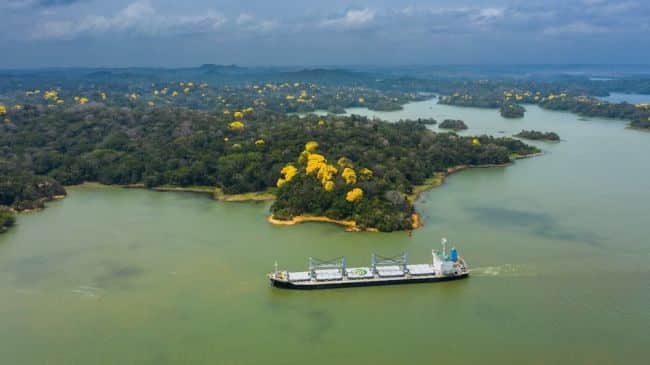 Despite the extensive use of water conservation tactics across Canal operations, inadequate draft levels were still projected to significantly restrict cargo transiting the waterway if no further interventions were made.

As a result, on February 15, the Panama Canal adopted a series of bold measures to sustain an operational level of water, including a freshwater surcharge informed by daily water level data at Gatun Lake, a profit-neutral measure that is also a standard practice across the industry. The reservation system was also altered to increase certainty around transit schedules, which allowed for more efficient use of water resources and conservation tactics, such as cross-filling lockages, an innovative technique developed by the Canal team that saves the same amount of water used in six lockages each day by sending water between the two lanes during transits at the Panamax Locks.

The February measures also built upon the progress made by the Canal’s many long-standing conservation initiatives. As one example, the Environmental Economic Incentives Program, or PIEA in Spanish, works to ensure families living along the watershed have the resources, education and other incentives to invest in the long-term sustainability of their property and the surrounding environment. The program has led to reduced rates of runoff and water usage in such communities, as well as the reforestation of over 22,000 acres of land, with over five million seeds planted and 3.5 million tons of C02 captured.

Now, less than three months after the conservation measures were implemented, the water levels at Gatun Lake can accommodate a steady 45-foot draft, higher than projected for the start of the rainy season, which is expected to begin mid-May. Panama’s rainy season official start date will be determined by various environmental factors, such as wind speed, rainfall in the watershed, ocean temperatures in the Gulf of Panama, among other metrics.

On top of minimizing draft restrictions, the Canal has provided relief to its customers during this time of instability by adjusting its reservation system. Developed in response to input gathered by the Panama Canal’s leadership from top customers, the changes introduced late last month offer extended flexibility surrounding fees and swapping booking slots.

Ultimately, this renewed draft reliability will help bolster the resilience of the Panama Canal route in the months ahead as the industry faces economic uncertainty in the aftermath of the coronavirus pandemic. Nonetheless, the Panama Canal’s search for long-term solutions continues. By the end of the year, the team aims to not only request and review engineering proposals, and after that, begin constructing a long-term solution. Having a steady water supply is a top priority for the Canal, and so we will partner with innovative engineers to ensure that we can maintain our reliable service for years to come.