Panama Canal Administrator Jorge L. Quijano made the announcement today during a signing ceremony inducting the waterway into the GIA at the Panama Maritime World Conference and Exhibition, where IMO Secretary-General Kitack Lim was in attendance. The announcement took place after the Panama Canal signed a letter of agreement on Friday, March 15 officially joining this group of global industry leaders.

“Today’s announcement marks a proud milestone for the Panama Canal and its long legacy as the Green Route of world maritime trade,” said Panama Canal Administrator Quijano. “Given our roots in sustainability and innovation, this partnership reaffirms the Canal’s commitment to leading our industry to a cleaner and more efficient future.” 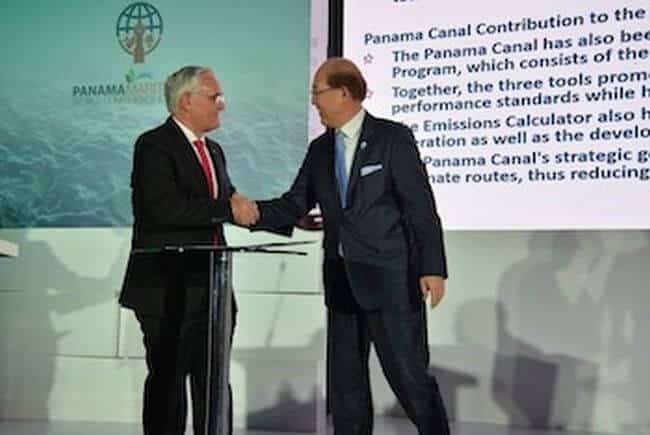 Launched in June 2017, the GIA is a partnership of 18 leading maritime organizations working together to share their expertise and provide technical input towards the implementation of concrete activities that can support the shipping industry’s transition to a low carbon future. The GIA members aim to do so by identifying and developing innovative solutions that address common barriers to the uptake and implementation of energy efficient technologies and operational measures. The Panama Canal will become the first Latin American organization to join the GIA.

The Panama Canal’s inclusion in the GIA falls in line with the waterway’s almost 105-year history of environmental stewardship. Since opening in 1914, the Panama Canal’s strategic geographic location has enabled vessels to shorten the distance and duration of their voyages compared to alternate routes, thus reducing costs and GHG emissions. In combination with the introduction of the Expanded Panama Canal in 2016, which offers greater cargo carrying capacity and requires less cargo movements, the Panama Canal is estimated to have saved more than 750 million tons of carbon dioxide emissions over the course of its history.

The Panama Canal has also been recognized for its pioneering sustainability initiatives, such as its Green Connection Environmental Recognition Program, which consists of the Green Connection Award, the Environmental Premium Ranking and the Emissions Calculator. Together, the three tools promote emissions reductions by recognizing and incentivizing vessels that comply with the highest environmental performance standards while helping others mitigate their own environmental footprints. The Emissions Calculator also helps the Panama Canal measure and reduce its own carbon footprint, operate more efficiently, develop a low carbon strategy and pursue a path towards becoming a “Carbon Neutral” entity.