The Panama Canal Authority (ACP) announced that the Panama Canal Expansion will be officially inaugurated on Sunday, June 26, 2016. The announcement was made this morning during the inauguration ceremony of the Canal’s state-of-the-art Scale Model Maneuvering Training Facility, which will provide additional hands-on experience to pilots and tugboat captains to operate in the Expanded Panama Canal.

The President of Panama, Juan Carlos Verela, was in attendance at the inauguration ceremony, along with the Panama Canal Board of Directors Chairman, Roberto Roy, and other distinguished members of the Board. 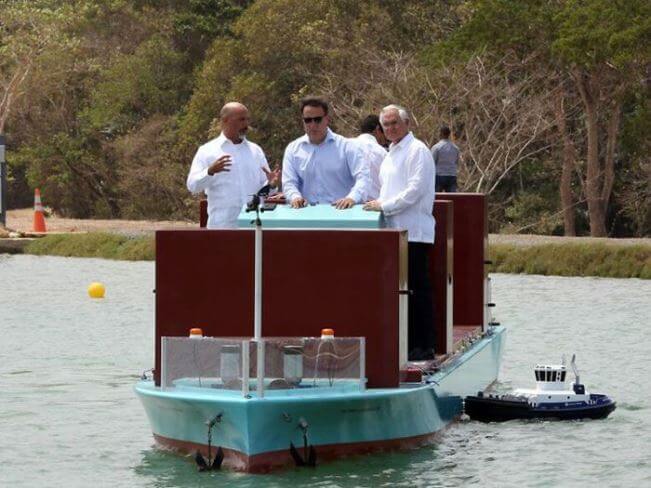 “The Scale Model Training Facility will allow us to continue providing world-class service to the global maritime industry, while guaranteeing safe and efficient transits through the soon-to-be inaugurated Expanded Canal,” said Jorge L. Quijano. “The dream of Expansion will become a reality when we inaugurate the biggest infrastructure project in the history of the Canal and the country of Panama.”

The innovative 35.3-acre training facility features two lakes connected by a channel modeled after the Canal’s Culebra Cut. The new facility features docking bays, replicas of the new and existing locks, gates, and chambers, all at a 1:25 scale.

The facility is equipped with a number of meticulously created scale model Panama Canal tugboats, as well as ships built in France at Port Revel, including bulk carriers modeled after the Nord Delphinus, and a container ship modeled after the Maersk Edinburgh. In addition, a liquid natural gas (LNG) ship will be delivered by September 2016.

The facility features wave and wind generators to provide a realistic, hands-on training experience for Canal pilots and tugboat captains to prepare them for the opening of the expanded waterway. It complements the training already provided at the Center of Simulation, Research and Maritime Development (SIDMAR) through immersive, 360-degree training simulations and courses.

The Expansion Program is currently 97 percent complete. Final testing will be conducting in the following weeks, leading up to the official inauguration of the Expanded Canal on June 26, 2016. More information related to the Expansion opening and inauguration, including media and non-media attendee registration, will be available soon on the Canal’s website.