Panama Canal Administrator Jorge L. Quijano has been awarded the Order of the Rising Sun, Golden and Silver Star, by the Government of Japan.

Established in 1875, the distinguished honor is bestowed by the Japanese Government upon individuals who make exemplary achievements in international relations, promoting Japanese culture, improving social welfare, environmental preservation or the advancement of their own respective field. Mr. Quijano was recognized for his service in strengthening relations through trade and global maritime transportation and promoting mutual understanding between the nations of Japan and Panama. 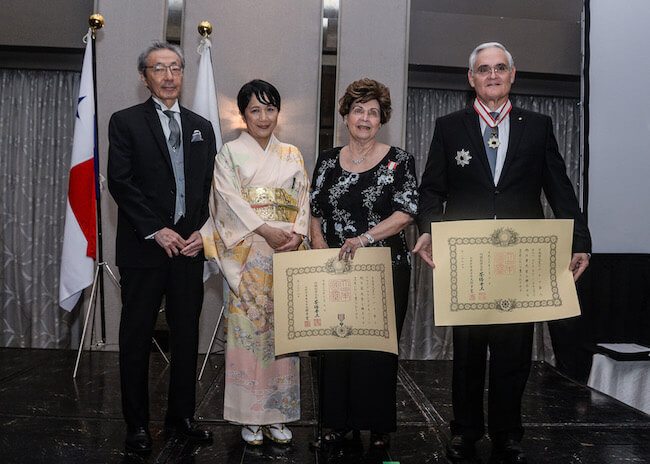 “We have been working very closely with Japanese government entities, as well as the ship owners, importers and exporters who are friends of our country and the Panama Canal. I want to thank the Government of Japan and I am very honored to receive this award,” said Panama Canal Administrator Quijano. “I accept this award on behalf of all the Canal workers who have supported me in strengthening this relationship with Japan for several decades.”

Mr. Quijano was honored in Panama at a reception commemorating the birthday of the Emperor of Japan, His Majesty Emperor Akihito.

Mr. Quijano’s mother, Mrs. Analia Arango de Quijano, an instructor at the Sogetsu School of Ikebana, was also awarded the Order of the Rising Sun, Silver Rays, for her contribution to the introduction and promotion of Japanese culture in Panama through her work with the Japanese art of Ikebana floral arrangement.