As part of its ongoing commitment to sustainability, the Panama Canal has announced the launch of the Emissions Calculator, an innovative new tool which will offer shippers the most accurate assessment of their carbon emissions, rank those who have reduced the most emissions by transiting the Canal versus alternate routes, and encourage action to reduce carbon footprints. With this announcement, the Panama Canal reaffirms its commitment to reduce the impact of greenhouse gases (GHG) and demonstrates its support of the global efforts at this week’s International Maritime Organization (IMO) meeting to set the new IMO Strategy on GHG reduction.

“The Panama Canal has always been committed to reducing its carbon footprint and impact on the environment,” said Panama Canal Administrator Jorge L. Quijano. “This new tool allows us to bring that same commitment to our customers, giving them the information needed to make a more informed and environmentally conscious decision when planning their routes.” 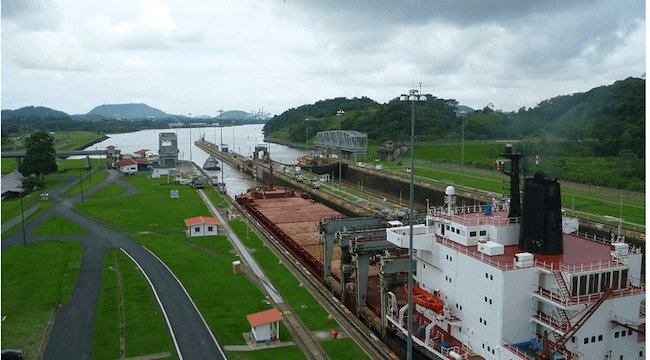 For more than a century, the Panama Canal has offered shippers an unparalleled environmental route. Its all-water passage requires fewer cargo movements compared to freight transportation via air, truck or rail. And given the shorter traveling distance and larger capacity it offers, the Panama Canal reduces fuel consumption and therefore emissions, generating less GHG compared to other routes.

Panama Canal Environmental Specialist Alexis Rodriguez explained that the Emissions Calculator will work by leveraging technology already aboard the world’s maritime fleet to capture an array of data on shippers (e.g. vessel type, size, capacity, speed, fuel consumption and route) and provide the most accurate measurement of the GHG they emit, including the total emissions saved by choosing the Panama Canal over other routes. Data will then be centralized in the CO2 Emissions Reduction Ranking, a specially designed platform which ranks customers by those with the fewest emissions each month. The Panama Canal hopes to incentivize customers to demonstrate strong environmental stewardship and adopt more sustainable itineraries. Already, the Panama Canal has received encouraging feedback from its preliminary conversations with the industry.

Beyond shippers, the calculator will help the Panama Canal reduce its own carbon footprint as well. The waterway will use the Emissions Calculator to measure and track emissions from its domestic day-to-day operations and support the planning of a low carbon strategy that will be used to establish a roadmap for the Panama Canal to become a “Carbon Neutral” entity.

As a leader in the maritime industry, the Panama Canal’s development of this tool is very much in line with its forward-looking commitment to sustainability and innovation. The Calculator will be housed within the Panama Canal’s Green Connection Environmental Recognition Program and will advance the program’s work to promote emissions reductions by recognizing vessels that comply with the highest environmental performance standards and encouraging others to do the same. It will bolster the program’s existing offerings, such as the Green Connection Award and Environmental Premium Ranking.

The CO2 Emissions Reduction Ranking will serve as the public facing platform of the Emissions Calculator. However, the specific data powering it can be made available to shippers upon request by emailing greenconnection@pancanal.com.