A Panama-flagged bulk carrier, the Top Grace, that was detained in South Africa last month after it was found to have thrown overboard two stowaways off the KwaZulu-Natal coast has been released, according to the South African Maritime Safety Authority (SAMSA).
The release of the vessel in Richards Bay on Thursday occurred accompanied by a stern warning to shipping vessels traversing South Africa’s oceans waters that they will be subjected to the fullest might of the law whenever found to have transgressed the country’s maritime laws.

In a statement in Pretoria on Friday, SAMSA said the release of the Top Grace on Thursday in Richards Bay was made after a thorough investigation, including a criminal prosecution of the crew, was conducted successfully by relevant South African authorities into the incident of a throw away at sea of two men by the vessels’ crew on or about 23 March 2020.

At the time according to SAMSA, it was alleged that the two stowaways had boarded the vessel “Top Grace” while it was berthed at Maydon Wharf in Durban on Monday 23th March 2020. They had climbed up the mooring ropes and hid in the bulk carrier’s chain locker. 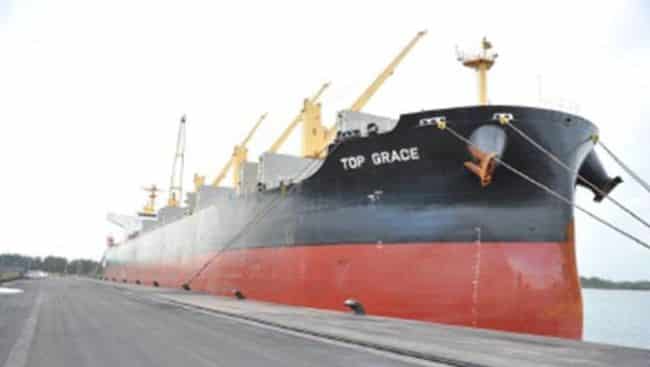 The two stowaways, both Tanzanians, reportedly claimed then that after being discovered hiding on the ship, after it had set sail, the vessels’ crew threw them overboard with a make-shift raft, life jackets and some bottles of water. They told authorities that they spent two days at sea before washing out at Zinkwazi beach on the North Coast of Kwa-Zulu Natal. Subsequent to that incident at sea, the vessel berthed at the Richards Bay harbour and was detained.

On Friday, SAMSA said the crew had since settled the fines imposed on it by a Durban court of law after it was found guilty of a criminal offence relating to the stowaways. Following to this, SAMSA also conducted its own separate investigation into the vessel’s possible breach of Section 9 (3) of the Maritime Traffic Act.

“SAMSA detained the MV Top Grace from 17 April 2020 – 23 April 2020 in Richards Bay in order to conduct an investigation into circumstances surrounding two foreign stowaways being forced off the vessel approximately three (3) nautical miles off the coast of South Africa.

“After the successful conviction of the Master and Crew for attempted murder, who were released after payment of a fine, SAMSA was then able to proceed with its own investigation without compromising the SAPS criminal investigation.

“The vessel was detained by SAMSA in terms of section 9(3) of the Marine Traffic Act for breaking innocent passage and causing prejudice to the peace, good order and / or security of the Republic. (Innocent passage is a concept in the law of the sea that allows for a vessel to pass through the territorial waters of another state, subject to certain conditions.)

“SAMSA appointed shipping lawyers from Bowmans to assist SAMSA’s surveyors with the investigation and to ensure a speedy conclusion. Under the Marine Traffic Act, SAMSA had seven (7) days following the detention within which to complete the investigation. A high tech investigation was conducted using sophisticated methods of data retrieval and analysis (including retrieval of deleted items) and a team of five (5) interpreters was employed to work around the clock to interpret Mandarin texts into English.

“Following a thorough assessment of the findings of the investigation SAMSA concluded that any further action against the vessel would not be warranted, save for the payment of a detention fine. The fine was paid on 23rd April and the detention of the vessel immediately lifted,” said SAMSA in a statement.

SAMSA further stated: “The investigation demonstrates that SAMSA will spare no resource in proper enforcement of its coastal state obligations and in the pursuit of its mandate of safety of life at sea, protection of the marine environment and promoting the Republic’s maritime interests. It is noted that in appropriate circumstances, vessels that commit crimes may be forfeited to the state in terms of certain legislation enforced by SAMSA.

“SAMSA would like to once again warn vessels sailing through South Africa’s territorial waters that any vessels found to have transgressed the national laws will be held accountable to the fullest extent of the law. SAMSA implores all vessels and ship operators to act responsibly during this period of uncertainty. Improper treatment of stowaways will not be tolerated in any circumstances.

Meanwhile, SAMSA further called on ships at the country oceans waters to not hesitate to call for assistance during this period of the global Covid-19 pandemic.

“Should any vessel in South African waters experience difficulties of a humanitarian nature occasioned by Covid-19, this should be immediately reported to SAMSA, and SAMSA will endeavour to assist. The Covid-19 crisis is not an excuse to break the law. SAMSA will continue to assist and provide guidance to any vessel transiting South Africa’s territorial waters.”