After a series of fatal accidents that killed several workers, officials have banned scrapping work of oil tankers and LPG containers at Pakistan’s Gadani Shipbreaking Yard.

Balochistan Chief Minister Nawab Sanaullah Zehri’s order comes after two recent accidents due to the lack of safety measures, and the ban is expected to be in effect until the yard ensures proper safety mechanisms. 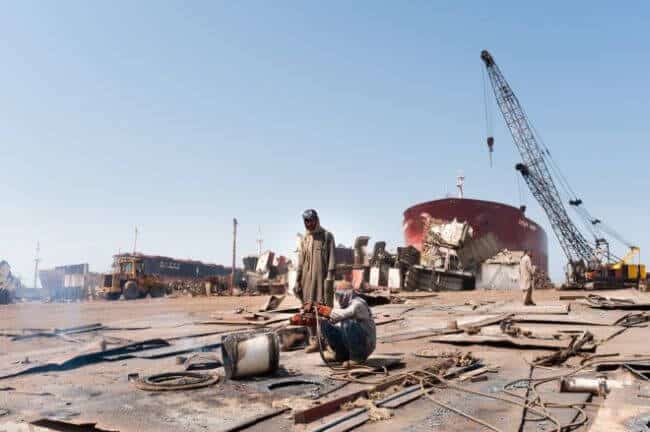 In January, at least five people were killed at the world’s third largest ship-breaking yard after a fire broke out in a ship parked in the area. In another accident in November, a tanker explosion had killed at least 28 workers and injured over 50 people at the yard.

Reports say that around 850 labourers have lost their lives ever since the yard started operating in 1968, while thousands of workers have suffered major injuries due the lack of safety measures.

Accidents and fires are reportedly common in the yards, when air pollution also often causes health problems for the workers.

In addition to the temporary ban, officials have also announced the decision to form a Gadani Shipbreaking Regulatory Authority in order to oversee regulations and carry out infrastructure projects.

Until the setting up of the authority, a temporary committee would be formed to hire services of experts from the private sector.

Heidegger added that the government should now modernize its shipbreaking industry and also transform it away from the beaches to modern, clean and safe ship recycling facilities.

The yards were earlier closed after the November accident, but the work was restarted in December after Ship Breakers Association called on federal and provincial bodies to restart the activities.

Filipino Crew Member Found Dead In A Ship At Port Qasim, Pakistan
Pakistan Navy Receives Its Most Advanced And Largest Warship From China
Pakistani Ship Master Returns Home After A Month Of Medical Care In India