Today(27th September), OOCL commemorated the christening of the latest 21,413 TEU containership to join our fleet this year. Constructed by Samsung Heavy Industries (SHI), Hull H2175 is the fourth in the line of six ordered by OOCL from the Korean shipyard.

Named the OOCL United Kingdom, and together with her sister vessels, Chief Financial Officer of OOCL Mr. Alan Tung indicated that they are “a class of their own” as the world’s largest by carrying capacity. 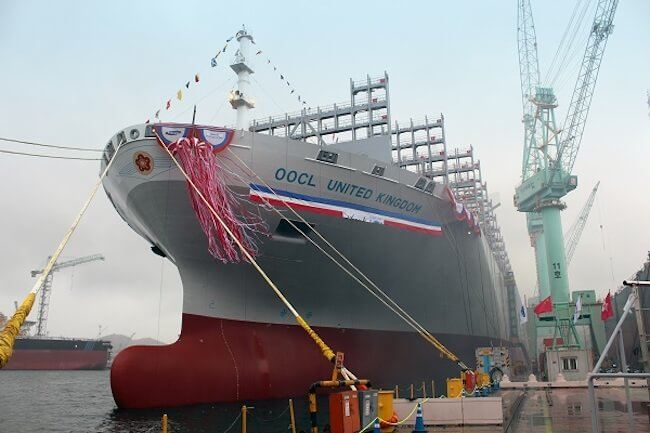 “Following our ‘M Class’ of 13,208 TEU vessels also built here at SHI, we are delighted to be adding these state-of-the-art titans at sea ‘G Class’ containerships into our fleet,” said Mr. Tung at the naming ceremony. “In commemoration of this milestone at OOCL, we are very pleased to be able to once again invite Mrs. Tamiko Onaka as our Sponsor to officiate the naming of our latest vessel. Thank you, Mrs. Onaka, for joining us and doing us the honor.”

The last time Mrs. Onaka gave her blessings to our vessel was in 2015 when the 8,888 TEU OOCL Genoa was christened and later set sail on her maiden voyage to begin her service on the Trans-Pacific trade lanes.

In his ceremonial address, Mr. Tung also gave his special thanks to our Guest of Honor, Mr. Koichi Onaka, Managing Executive Officer of Sumitomo Mitsui Trust Bank (SMTB), for playing an important role in supporting OOCL’s fleet improvement that started with the financing work on two OOCL ‘SX Class’ vessels which eventually culminated in making the OOCL United Kingdom a success.

“SMTB has long been recognized for its knowledge in the shipping industry,” said Mr. Tung. “The reasons for this success is both due to a long history of shipping in Japan and also the Bank’s global outlook and perspective. I cherish our friendship and look forward to further our collaboration and work together in the future.”

To express his gratitude and appreciation at the event, Mr. Onaka said: “My special thanks goes to all those who contributed to the success of OOCL United Kingdom. Without your great dedication toward this project and brilliant organization, this wonderful event wouldn’t have been possible. I am very proud to be here, and I thank OOCL for giving my wife, Tamiko, the great honor to name and bless the vessel. It is an experience she and I will never forget.” 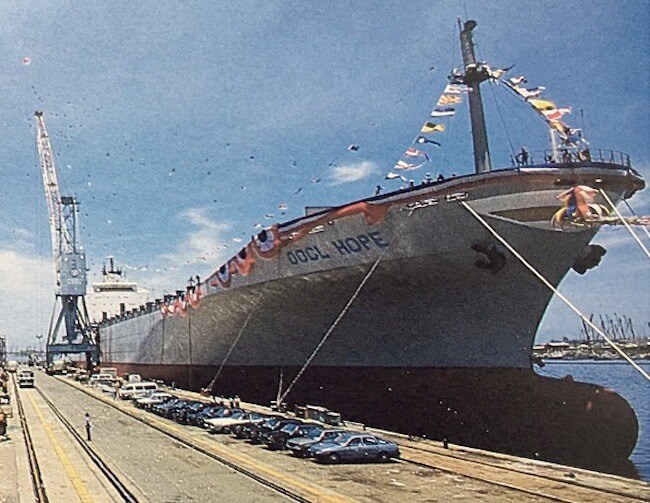 In thanking SHI and commenting on the long-standing business partnership with the shipyard, Mr. Tung remarked: “The shipbuilding process is a complicated one. From hull form design, machinery selection, fabrication to assembly, the shipyard must be able to bring a concept on paper to become a technically sound and economically viable product for the ship owner, the shipyard, the makers and sub-contractors. Adding on the fact that many aspects of this class of vessels are in fact record breaking, be it size or machinery capacity and output, I think SHI should be very proud that it has achieved this goal in the safest and most efficient manner.”

Together with her sister ships, the OOCL United Kingdom, as the largest containership in the world, follows the same port rotation to call Felixstowe as the first European port of call in her maiden voyage. Interestingly, 27 years ago in 1990, the largest containership in the world at the time also celebrated her first European port of call on her maiden voyage to Felixstowe. She was the vessel named OOCL Hope, a 3,500 TEU containership from OOCL. To put things further into perspective, OOCL United Kingdom is six times larger or 600% greater in capacity, but only burns 60% more fuel per day. 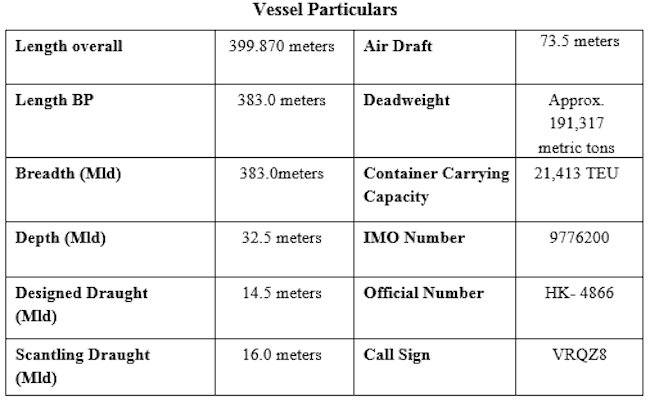