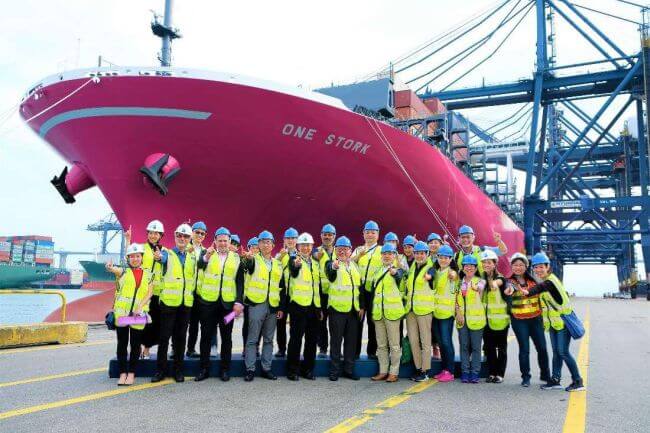 Celebrating the call of ONE STORK in Hong Kong, Mr. Mizukami, said, “We are very proud of ONE STORK, the new 14,000 TEU-class magenta containership makes a successful call at HIT, this new vessel continues ONE’s commitment to service excellence and quality to our customers.”

At 364 metres in length and 50.6 metres in width, the main engine of ONE STORK is equipped with a dual rating system that further improves fuel consumption and CO2 emissions. Additionally, the hull form also allows for improved cargo-loading efficiency.

“Hong Kong’s prime location, world-class infrastructure and proximity to China markets makes our city an efficient maritime hub in the region and one of the key international container ports to the global trade. With ONE STORK’s maiden call to Hong Kong, we are very happy to have yet another opportunity to celebrate our cooperation with the city, the port and HIT.” Mr. Mizukami added.

HIT’s Managing Director, Mr. Yim said, “The arrival of ONE STORK marks not only a milestone in our partnership, it also shows ONE’s confidence in HIT’s operational efficiency. We look forward to strengthening our cooperation and providing the quality service to ONE’s vessels during their stay in Hong Kong.”

Deployed on THE Alliance’s Asia to North America EC4 service, ONE STORK set off her maiden voyage and has already made Kaohsiung port of call on 16 June before calling at HIT. She will continue to sail to Yantian, Cai Mep, Singapore via the Suez Canal to New York, Norfolk, Savannah and Charleston on the United States East Coast. On her way back to Asia, she will call again at New York, Singapore and Kaohsiung.

Vessel Particulars of ONE STORK