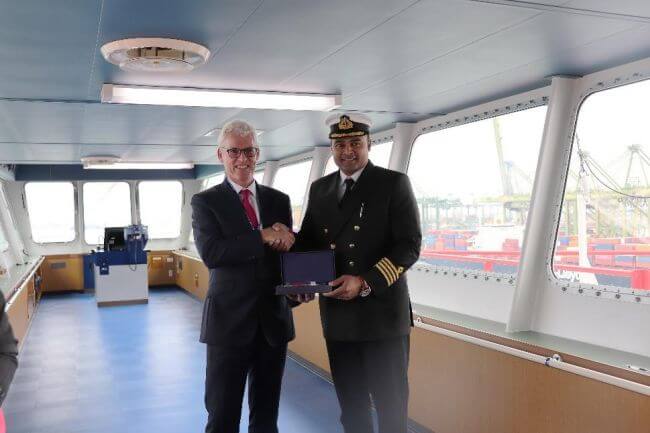 ONE STORK was just delivered to ONE from Japan Marine United Corporation at Kure shipyard in Hiroshima, Japan on 12 June. After she sailed from Kure, the vessel phased in EC4 service with the port of call at Kaohsiung, Hong Kong, Yantian, and Cai Mep. Singapore is the last port in Asia with expectation for the next long journey to United States East Coast with the port of call at New York via Suez Canal, Norfolk, Savannah and Charleston.

Celebrating the call of ONE STORK in Singapore, Mr. Jeremy Nixon said, “We very much welcome the ONE Stork to Singapore, the city which is where our Global Head Office is now based, and a major operational transhipment hub for ONE”. We wish a safe voyage for the officers and crew aboard the ONE STORK, one of the most technically advanced container ships in the world.”

The vessel, ONE STORK, employs a hull form that allows improved cargo-loading efficiency achieved by minimized engine-room space. Moreover, the vessel applies the duel system in its main engine which is capable to choose two other output ranges (high and low) that allow flexible operation and improved fuel-consumption rate, resulting in a significant reduction of carbon dioxide emissions.

The vessel made a debut at PSA Singapore with its distinctive colour. “Including the colour of her hull, magenta! Magenta is very symbolic of our new companies’ independent and innovative approach to global container shipping. Magenta we also hope will improve safety, and make the ONE STORK, and her sister-ships, much more visible to all the many other vessels that may pass her in close proximity over the course of her full trading life.” Mr. Jeremy Nixon added. 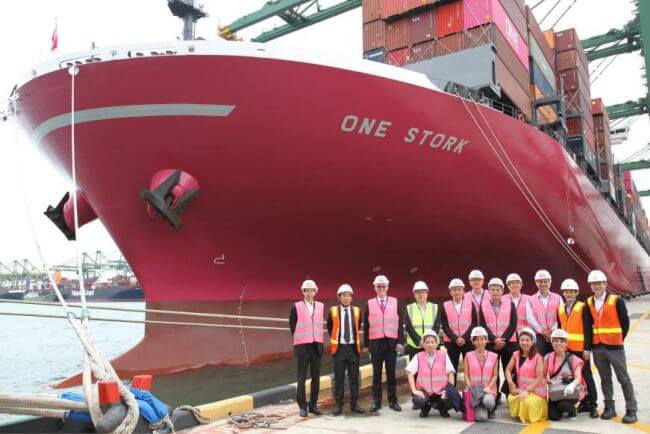 The vessel is deployed on THE Alliance’s EC4 service (Asia to North America East Coast). ONE continues to provide higher quality and more competitive service by connecting our valued customer in both Asia and North America.

Vessel Particulars of ONE STORK