You are here: Home › Shipping News › ONE Celebrates Arrival Of The Largest Container Vessel In Laem Chabang, Thailand
TwitterFacebookLinkedInPinterestBuffer

Ocean Network Express (ONE) held a welcome event on 26 November 2018 to celebrate the maiden call of its ONE COLUMBA vessel at the Thai port of Laem Chabang. The arrival was in fact a significant milestone for the entire maritime trade of Thailand as it marks the largest container vessel ever to call upon the “Land of Smiles”.

Likewise, on the day before the event, other notable representatives like Dr. Pailin Chuchottaworn (Deputy Minister of Transport), Dr. Siri Jirapongpan (Minister of Energy) and Mr. Somsak Hommuang (Director General of Marine Department, Chairman of the Board of Port Authority of Thailand) also visited Laem Chabang for a private tour and inspection of the newly built 14,000 TEU container vessel. 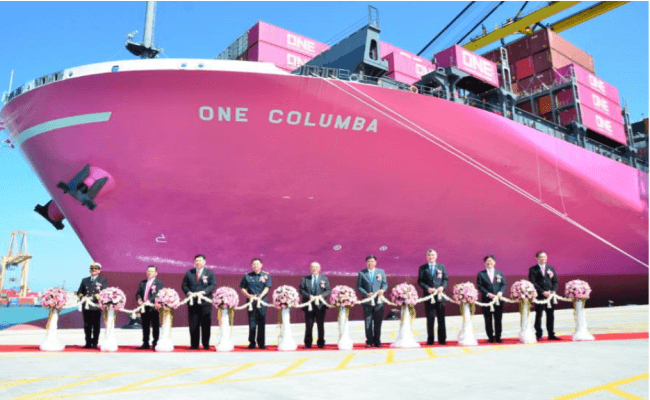 The arrival of ONE COLUMBA has reaffirmed the commitment of ONE in augmenting the overall maritime trade between Thailand and the major trade lanes around the world. Particularly, the arrival has demonstrated ONE’s support of the Thai government’s initiative to transform Laem Chabang into a major marine hub of Southeast Asia, as well as to improve its trade connectivity with the region via the Eastern Seaboard of Thailand. In his opening speech, this is emphasized by Mr. Kiyoshi Tokonami (Managing Director of ONE Thailand) who quoted the event as “a historical turning point and a sign of ONE’s strong decision to support for the Thai government’s policies for economic growth through initiatives such as the Eastern Economic Corridor (EEC) Project.”

ONE COLUMBA is currently deployed on the Far East Europe 5 service (FE5). The new weekly service will provide a direct connection between Thailand, Vietnam, Singapore, Sri Lanka, Europe and the Middle East.