Traditions dating to seafarer days centuries ago to bring good luck remain alive and well with coins for “divine protection,” godmother blessings for new ships, no whistling in the wheelhouse and spilled rum for Neptune. And for good measure, step aboard the ship with your right foot first.

Mariners tend to be superstitious. They don’t like to rock the boat, so to speak.

So even in the 21st century, with modern cruise ships sailing guests around the world in extraordinary comfort and guided with the latest in navigational equipment, some traditions linger, dating back to rugged early seafarer days.

Dutch Captain Emiel de Vries, of Holland America Line’s sparkling new 2,650-passenger Koningsdam, said one of the first things he looks for on a ship is a certain bottle of water. 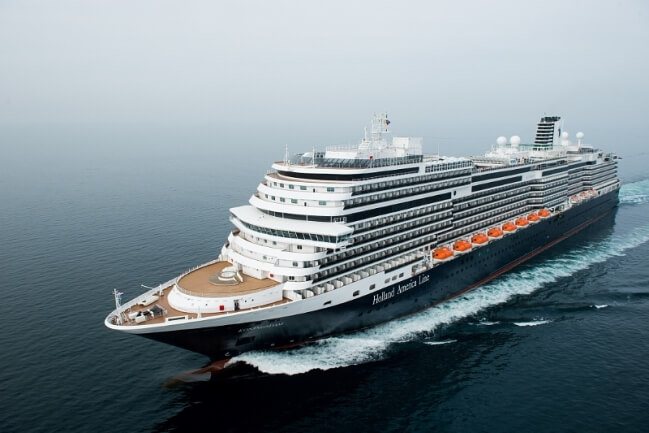 “When a ship starts to float, the water that first touches the ship is caught in a bottle and it’s sealed. Later it is typically displayed in the captain’s office near the bridge. You walk in and think, ‘Ah, there’s the bottle. Everything is good,'” Captain de Vries explained. “If I would walk on a ship and it’s not there, I would find that odd.”

Captain de Vries was presented with the Koningsdam’s bottle by shipbuilder Fincantieri in April – during a traditional handover ceremony attended by dignitaries including Carnival Corporation executives.

Other construction milestones are also celebrated with pomp and circumstance based on time-honored maritime tradition.

A steel-cutting ceremony signals the start of a cruise ship’s production. A keel-laying ceremony marks the first completed section being lowered by giant cranes onto the building dock. The float-out ceremony takes place when a ship first touches water.

Good luck coins are often involved. For instance, two commemorative gold coins were welded in place in February at the Fincantieri shipyard in Monfalcone, Italy, to mark the float-out soon afterward of ultra-luxury brand Seabourn’s 600-passenger Seabourn Encore, set to debut in December 2016.

The coin tradition dates back to Roman times when coins were attached to a ship to provide “divine protection.” On modern ships they are typically on display on the radar mast. Next time you are aboard a ship, head up to the top deck to try and spot the coin or coins.

The most popular present day maritime ritual, developed in the 20th century, is having a notable godmother say a blessing and oversee the smashing of a bottle of champagne across a new ship’s hull. The tradition dates to ancient times when wine was used and men did the duties and perhaps, it is said, spilled the wine on purpose to check for cracks in the hull.

When the Koningsdam was christened in Rotterdam on May 20, a Holland America Line tradition was upheld – the Pinnacle-class ship was the 12th in the 143-year-old line’s history to be launched with the participation of Dutch royalty. Her Majesty Queen Máxima of the Netherlands did the honors.

Specific ships have their own traditions. For instance, there may be a bridge mascot.

Always positioned on the starboard side of the bridge on Holland America Line’s 1,432-passenger Volendam is Flat Eric, the yellow puppet who starred in Levi’s jeans commercials (directed by French musician Mr. Oizo) in 1999, the year the ship debuted. Officers presented the puppet, which they call “Oizo,” with a 15-year service award in 2014.

A tradition unique to Cunard’s Queen Mary 2 oceanliner is for officers to “mark” the distance of a transatlantic crossing between Southampton, England, and New York with a toy ship that sits on top of a monitor on the bridge. Each day, it is moved a bit further to symbolically coincide with how much distance has been sailed.

Based on longstanding tradition, the crew bar on Cunard ships is always called “The Pig and Whistle,” named after the nearest pub to where Cunard ships historically docked in Liverpool.

Other traditions on ships of the venerable Cunard Line include calling the back-of-the-house crew thoroughfare the “Burma Road.” On Carnival Cruise Line and Holland America Line ships, the long crew passageway is known as “I-95,” in tribute to the highway that passes through Carnival Corporation’s home base of Miami.

Carnival Cruise Line, which this month debuted the 133,500-ton, Italian-built Carnival Vista, the line’s largest and most innovative ship, also has its own traditions.

Italian captains on Carnival Cruise Line ships never toast with water, because doing so may bring bad luck. And they dislike umbrellas on the ship and new shoes on the bridge, according to John Heald, Carnival Cruise Line’s long-time senior cruise director.

Other nautical superstitions are more universally embraced. Here are a few examples:

It’s considered bad luck to step onboard a ship with your left foot first.

There’s no whistling in the wheelhouse (today’s bridge), because you might whistle up a storm.

Toasting with champagne will assure a Bon Voyage.

On world cruises, trans-Pacific voyages and South America sailings, such as those of Princess Cruises, a favorite maritime tradition is a ceremony for guests as the ship crosses the equator. Originally a hazing ritual for sailors, Pollywogs (newbies) are summoned by King Neptune and his court and ordered to do things such as crawl, kiss a fish or jump into the pool before being able to claim status as experienced Shellbacks.

Never worry if you spill wine overboard at your ship’s Sail Away party as it brings good luck – considered an offering to the gods. According to tradition, Neptune also doesn’t mind an occasional shot of rum.

Human Rights at Sea Partner With Marlins On New E-Learning Course
Photos: Stranded Filipino Seafarers Finally Return Home From China After 6 Months
Want to share your tips and advice? Got questions? Visit the community forum to ask questions, get answers, meet people, and share your tips!