The Ocean Viking, a rescue ship operated by SOS MEDITERRANEE in partnership with Medecins sans Frontieres (MSF) is waiting for a port to disembark 274 men, women and children, rescued over three rescue operations in the Central Mediterranean on February 18 and 19, 2020.

Among them are 22 women and 64 minors, most of whom are unaccompanied. HRAS reproduces the statement of Nicholas Romaniuk, from on board the Ocean Viking, SAR Coordinator for SOS MEDITERRANEE.

“These three Search and Rescue operations were again conducted with a complete lack of coordination from maritime authorities. The Libyan Joint Rescue Coordination Center (JRCC) would not answer our calls or the person on duty could not speak English. European Coordination Centers continued to tell us to contact the Libyan authorities and offered no support even though I repeatedly informed them that Tripoli was not responding. It is unacceptable that these people could be left alone, in distress, in the middle of the sea, in extremely overcrowded and unseaworthy boats where death would be their only option. 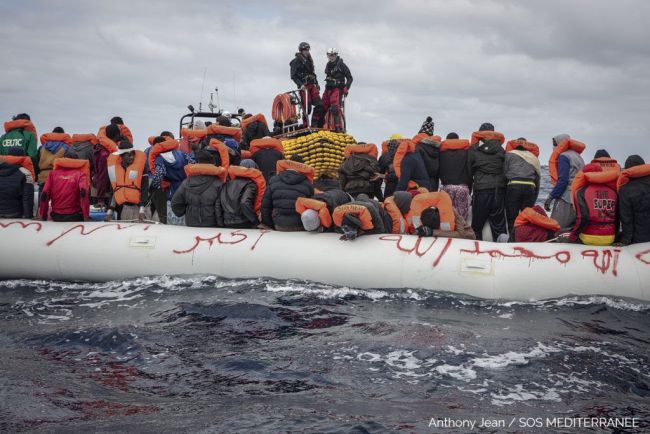 I am even more angered and saddened today. For four years, I have watched the situation get worse, not better. European leaders are showing less and less empathy and a complete disregard for human life. People fleeing from Libya are now paying a heavy price. This is continuing to happen in the shadow of the announcement of the end of Operation Sophia, the possible creation of a new mission, but one with a total aversion to saving human life. As EU naval assets will reportedly operate far from the usual area of distress, all that will remain will be the EU-funded and trained Libyan Coast Guard; a Coast Guard that yesterday only, according to the International Organization for Migration (IOM), intercepted and returned over 200 men, women and children to a country in an ongoing conflict, with ceaseless human rights violations, and a port that only hours earlier was being shelled by artillery fire.

Rescue Coordination Centers and European air assets are barely alerting vessels in the area about boats and people in danger and in potentially deadly situations -situations where time is essential. It is vital to locate these very fragile, overcrowded boats as fast as possible. Rubber boats can break apart and wooden boats can capsize at any time and their human cargo will sink beneath the waves, out of sight and out of mind. Rescuing people in distress at sea is a duty and obligation under maritime law. I remain concerned that this anti-rescue rhetoric is now shaping EU policies. NGO rescue missions are more necessary than ever. Unjustified criticism of our lifesaving work has lately become more explicit from certain European countries and leaders. While NGOs are not meant to fix a broken system, they will continue to fill a gap left by EU policymakers.”