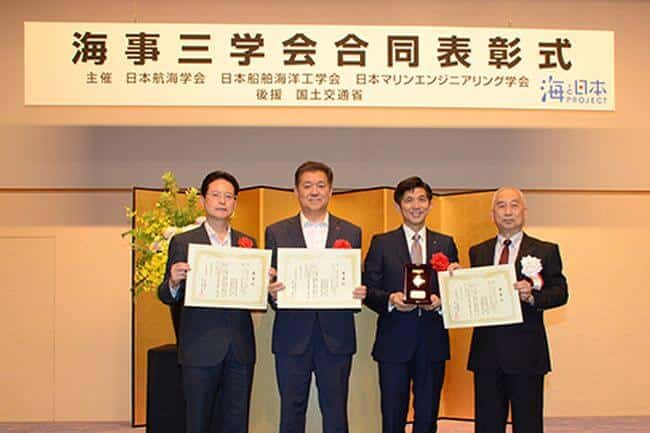 NYK has been recognized with a special award from the Japan Institute of Navigation for improving onboard operation through use of J-Marine NeCST, * a ship navigation support tool that was jointly developed by NYK, MTI Co. Ltd., and Japan Radio Co. Ltd. (JRC).

An awards ceremony was held on July 12, 2019, and attended by Tomoyuki Koyama, NYK managing corporate officer; Kazuo Ishizuka, president of MTI; and Kensuke Ohnuma, director and executive officer of JRC.

NYK jointly developed J-Marine NeCST in 2017 to contribute to safe navigation by reducing onboard workloads through the digitalization of know-how and more efficient information-sharing between vessels and land through cloud servers.

In accordance with its “More Than Shipping 2018” medium-term management plan, the NYK Group will continue to promote digitalization for safer operations.

* J-Marine NeCST (“NeCST” is pronounced “Next”)
A ship navigation support tool that allows users to easily plan routes using the handwriting function of the electronic navigational chart, in addition to managing and sharing operational data using integrated information such as meteorological and hydrographical forecasts.