On June 27, the expanded Panama Canal opened for commercial transit, and Lycaste Peace, a very large liquefied petroleum gas (LPG) carrier operated by NYK, was the first vessel to complete a commercial passage through the new locks.

On June 26, the Panama Canal Authority held an inauguration ceremony for the expanded canal. The maximum dimensions of a vessel transiting the canal have been expanded to 366 meters in overall length, 49 meters in breadth, and 15.2 meters of draft. In 1914, the NYK-operated Tokushima Maru was the first Japanese-flagged vessel to pass through the canal, and over the 100-plus years since then, NYK and the Republic of Panama have maintained an important partnership. 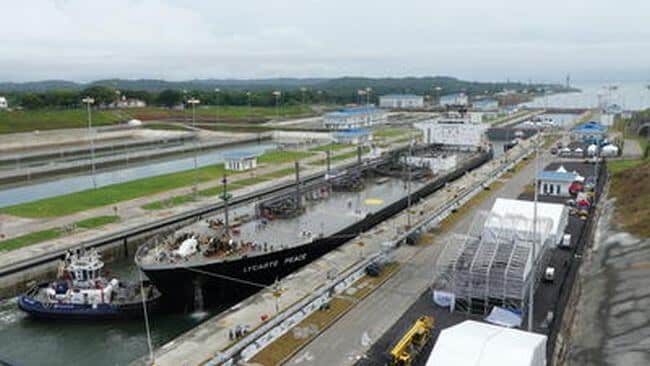 Lycaste Peace transports LPG procured in the U.S. by the Astomos Energy Corporation (head office: Chiyoda-ku, Tokyo; president: Osamu Masuda) to Japan. Astomos Energy is one of the world’s largest players in the LPG business, and NYK has maintained a close business relationship with the company for many years.

Astomos Energy plans to increase its LPG handling volume from the current 10 million tons/year to 12 million tons/year by 2017. Furthermore, the company is expecting growth in its LPG business in the coming years, including LPG procurement associated with new LNG projects in the Middle East, the U.S., and Australia. The expanded Panama Canal is expected to shorten transportation days to Japan from the U.S. East Coast and allow for further diversification of LPG supply sources.

Based on the business strategy outlined in the NYK Group’s “More Than Shipping 2018” medium-term management plan, NYK will continue to take advantage of creative solutions for stable, economical operations.