NYK has concluded a long-term consecutive voyage charter (CVC) contract with JFE Steel Corporation for a new large bulk carrier that uses LNG (liquefied natural gas) as its main fuel. This vessel will be the first LNG-fueled capesize bulk carrier to be built by NYK. The ship will be delivered in early 2024 and will be used in the Pacific trade of iron ore and coal for JFE. 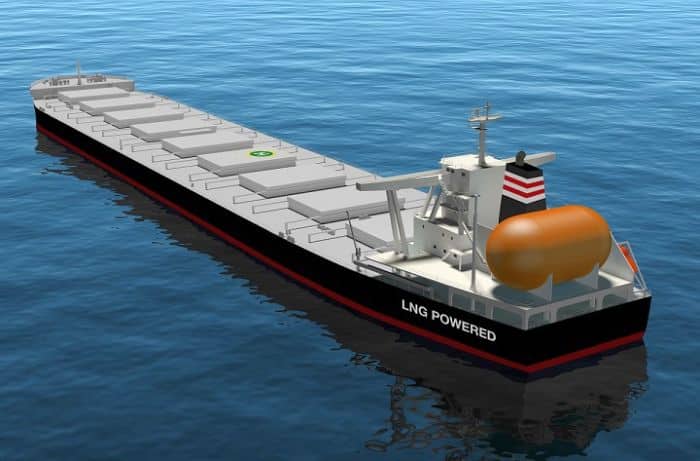 This ship will emit approximately no sulfur oxides (SOx), 85% less NOx, and 25-30% less carbon dioxide (CO2) compared to conventional heavy oil-fueled vessels. In addition, due to careful consideration of the equipment and arrangement of the LNG fuel tank and LNG fuel supply system, this ship will maintain the loadable quantity and cargo hold capacity of conventional bulk carriers of the same size despite the increased weight of additional equipment.

NYK will prepare the LNG bunkering system by the time the vessel is delivered, anticipating that LNG fuel will be replenished by ship-to-ship bunkering*** when calling ports in the Chugoku region of Japan.

NYK aims to further advance to zero-emission vessels utilizing marine fuels that have a lower environmental impact, such as hydrogen and ammonia. For the moment, NYK is positioning LNG fuel as a bridge solution until future zero emission ships can be realized.