In December 2015, MC reached agreement on a shipbuilding contract with MI LNG Company Limited,*** in addition to a heads of agreement for time-charter party with Diamond Gas International Pte. Ltd.**** Then in May 2016, MC established a vessel owning company, DLS-3, on the assumption of LNG vessel co-ownership with NYK, Toho LNG Shipping, and Tohoku Electric Power. 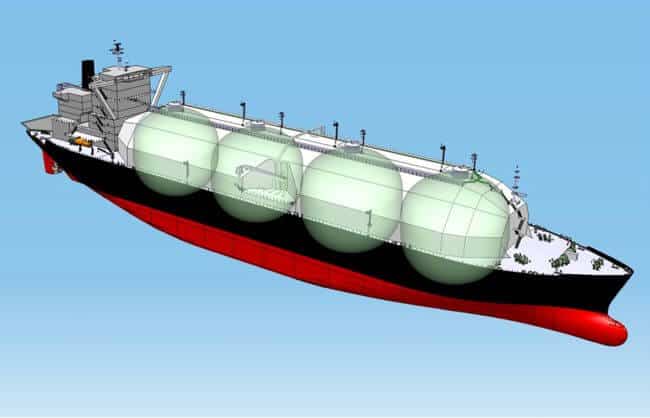 Since these four companies have received formal business approval by relevant authorities, NYK, Toho LNG Shipping, and Tohoku Electric Power now have an equity stake in DLS-3. The shipbuilding contract and the heads of agreement for the time-charter contract have thus been transferred by MC to DLS-3.

The new LNG vessel which will be built by Mitsubishi Heavy Industries Shipbuilding Co. Ltd.***** have a capacity of 165,000 m3, and be a “Sayaringo STaGE” carrier.****** Upon completion in 2019, the ship, which will be managed by NYK, will be assigned to transport LNG for Toho Gas Co., Ltd. and Tohoku Electric Power from the Cameron LNG Project located in the U.S. state of Louisiana. NYK and MC both have an equity stake in this project.

As LNG demand throughout the world continues to grow, NYK will continue its efforts to promote the Cameron LNG project and provide stable and economical LNG transport services.

***** Mitsubishi Heavy Industries Shipbuilding Co., Ltd.
A wholly owned group company of MHI that focuses on the construction of merchant vessels in Nagasaki.

****** Sayaringo STaGE
A next generation LNG carrier that has a continuous steel cover over its spherical aluminum tanks and a hybrid propulsion system named STaGE (Steam Turbine and Gas Engines) which is developed by Mitsubishi Heavy Industries Shipbuilding Co., Ltd. The characteristics of the STaGE are the “Ultra Steam Turbine plant”, a highly efficient reheating steam type marine turbine, and a dual-fuel diesel engine capable of operating on both gas and oil, which form a highly fuel efficient propulsion system.