A training program for seafarers responsible for liquefied natural gas (LNG) and other low-flashpoint fuels on board NYK Group-operated ships has been accredited by Nippon Kaiji Kyokai (Class NK), making NYK the first Japanese shipping company to obtain an international institution’s certification in the field of IGF Code* training.

The use of natural gas as fuel, particularly LNG, has increased in recent years to prevent pollution, and it is said that more than 200 LNG-fuelled ships, including those on order, are currently part of the industry.

To enhance safety and minimize the risk of the rising number of LNG-fuelled ships, the International Code of Safety for Ships Using Gases or Other Low-flashpoint Fuels (IGF Code) has been adopted by the International Maritime Organization (IMO) and requires seafarers to receive training certificated by a maritime institution in their own country or the flag state.

Compared with Europe, a training system had not developed in Asia, and thus seafarers from the Philippines and India, which make up the majority of seafarers in the industry, struggled to meet the IGF Code requirement.

In accordance with its medium-term management plan “Staying Ahead 2022 with Digitalization and Green,” NYK aims to proactively introduce environment-friendly ships, including those fuelled by LNG. To secure human resources that meet the requirements of the IGF Code, NYK has thus developed its own training program. 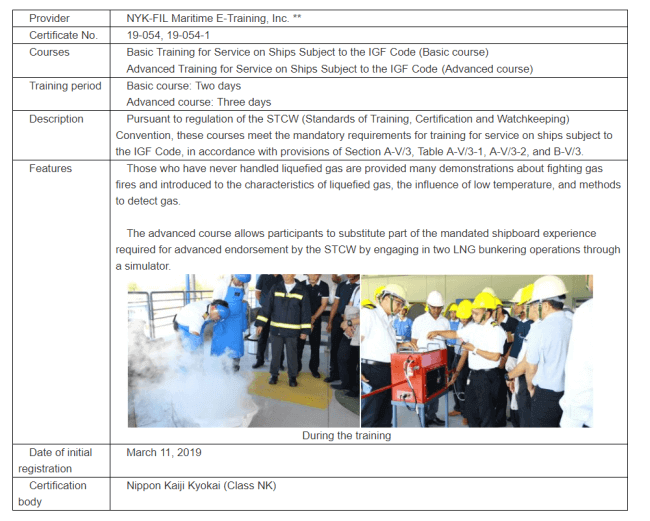 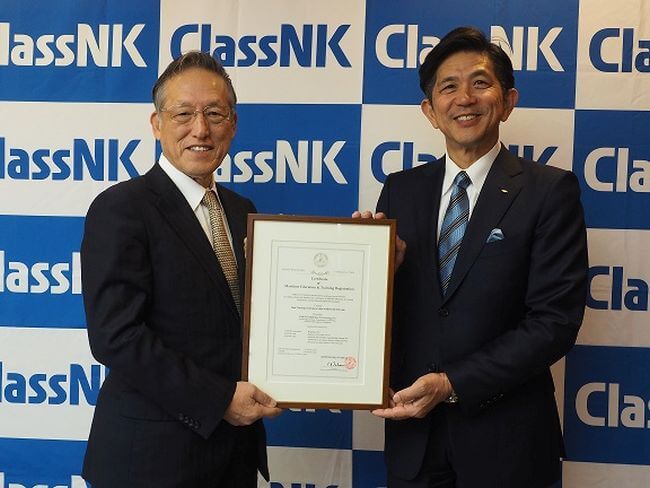 An accreditation ceremony was held at Class NK’s head office in Tokyo.

The NYK Group will continue to obtain accreditation from other countries to secure and train seafarers. Building on the company’s basic philosophy of “Bringing value to life” and contributing to the betterment of societies, the group seeks to positively address environmental issues through the use of next-generation fuels.

* International Code for Ships Using Gases and Other Low-flashpoint Fuels (IGF Code)
An international safety code that entered into force in 2017. SOLAS provides a clear legislative framework for ships to install LNG fuel systems, and STCW covers seafarer ability and training programmes.
(IGF Code ships use LNG, methanol, or other low-flashpoint fuels and do not include IGC Code ships that transport LNG and LPG.)