You are here: Home › Shipping News › NYK and JMU To Utilize Big Data on Series of 14,000 TEU Containerships
TwitterFacebookLinkedInPinterestBuffer

NYK, the Monohakobi Technology Institute, and Japan Marine United Corporation have agreed to conduct joint research on a series of 14,000 TEU containerships, including NYK Blue Jay, which entered the NYK fleet at the JMU shipyard on February 22.

For NYK Blue Jay, which is the first containership of the series, NYK received the cooperation of the owner to provide technological advice to JMU from the shipbuilding stage. NYK will accumulate and analyze various operational Big Data collected from NYK Blue Jay, and feed the analytical results back to JMU. 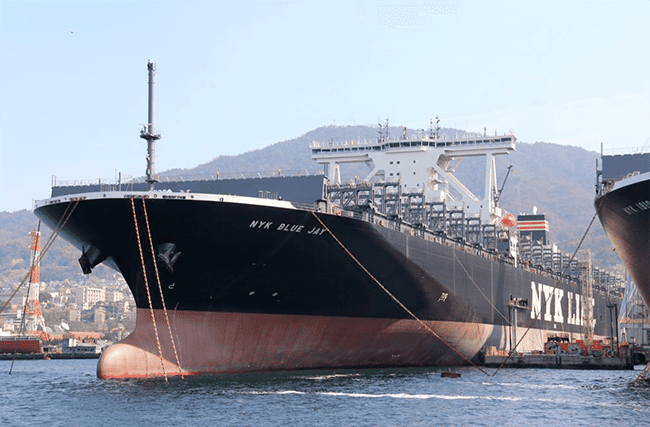 Against a backdrop of widespread use of the Internet in the maritime industry, NYK’s onshore staff has been able to use the MTI-developed SIMS2* to gain a more accurate grasp of operational data from oceangoing vessels. Big Data acquired in future joint research through the use of SIMS2 on containerships in this series will be accumulated at a ship data center established by ClassNK in December 2015. By utilizing this Big Data, more efficient and safer operation of vessels can be pursued. By collaborating with more joint research partners in the future and thus enhancing research quality, it is expected that the usability of Big Data will be further enhanced. Specifically, the joint research aims to achieve the following three objectives:

The NYK Group will further promote the utilization of Big Data in operations to improve the competitiveness of the company’s services. Also, as a good corporate citizen the NYK Group will continue to take an active role in social issues, including environmental conservation, and will continue to make efforts to contribute to the achievement of a sustainable, improved global society.