Hurricane Harvey is getting stronger and could make landfall in the middle of the Texas coast Friday night, the National Hurricane Center says, warning of the potential for a deadly storm surge and flooding along the Gulf of Mexico.

Early Friday morning, the Center said Harvey had strengthened to a Category 2 hurricane with maximum winds as strong as 100 mph.

The storm’s winds could reach 115 mph later on Friday, forecasters say, announcing that much of the Texas coast, from Matagorda to Sargent, is currently under a hurricane warning.

Harvey could bring a storm surge of 6 to 12 feet above ground level; rainfall of 12 to 20 inches could bring floods, with some areas getting as much as 30 inches of water from Friday into next week, the National Weather Service agency said in an advisory Thursday morning. 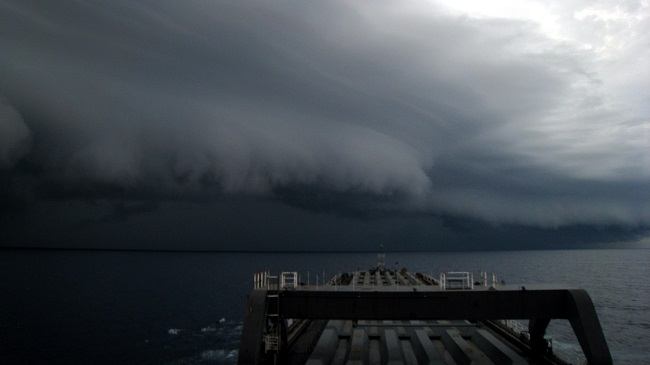 A storm surge warning is in effect for hundreds of miles of the Texas coastline, from Port Mansfield near South Padre Island to High Island about midway between Galveston and Port Arthur.

Beaches and schools in the storm’s path are closing. The Corpus Christi office of the National Weather Service is urging residents to finish their preparations for the storm now, before conditions deteriorate. To combat flooding, the city of Corpus Christi is currently providing residents up to 20 sandbags each.

At the White House, Press Secretary Sarah Huckabee Sanders said President Trump has been briefed on the storm and will be updated as it progresses, and that he “stands ready to provide resources if needed.” She said the administration is “in great shape having former Homeland Security Secretary John Kelly sitting next to the president throughout this process,” dismissing concerns that the federal government response to the storm might be hampered by a lack of a permanent replacement at DHS.

The Federal Emergency Management Agency, part of DHS, coordinates the federal response to natural disasters. Its administrator, Brock Long, issued a statement urging residents to follow directions from their local officials. “Know your threats, heed the warnings, and if you’re in the path of the storm, ensure your family is prepared for possible prolonged disruptions to normal services,” Long said.

FEMA has established an Incident Support Base at Randolph Auxiliary Airfield near Seguin, Texas, where the agency has pre-positioned supplies including water, meals and blankets, should they be needed.

Houston schools have canceled classes for Monday, Houston Public Media reports, with the threat of bad weather putting off what had been scheduled to be the first day of the school year for the Houston Independent School District.

The forecast for Harvey “has become quite concerning,” the hurricane center says, after an Air Force Reserve Hurricane Hunter aircraft found the storm’s center early Thursday. The storm was seen at the verge of becoming a hurricane, with central pressure that continues to fall and the storm predicted to strengthen as it passes over warm water.

Calling the intensification “astounding,” NHC forecasters said Thursday morning that there is “a 70 percent chance of Harvey’s winds increasing by 45 kt [some 50 mph] over the next 36 hours.”

The deepest storm surge will hit the coast near the center of the landfall and to the northeast, “where the surge will be accompanied by large and destructive waves,” federal forecasters say.