During the ceremony, the first of 80 blocks that will comprise the 168,800 gross ton vessel was lifted into the covered building hall, officially marking the start of the ship’s assembly. Norwegian Cruise Line and Norwegian Cruise Line Holdings Ltd. (NCLH) executives were present in the hall and laid the traditional “lucky coin,” before the first block, weighing 680 tons, was placed by a massive crane.

A special commemorative coin featuring the ship was created to celebrate the day’s activities. In a ceremony held at the XingTian Temple at Fang Ta Park in Shanghai on March 31, 2016, NCLH China executives gathered for a traditional prayer and pledge ceremony to the Chinese Goddess of the sea, Mazu 媽祖, to bring blessings to the coins, the ship and all of the guests who sail on her. The same coin was then placed under the block during the ceremony. 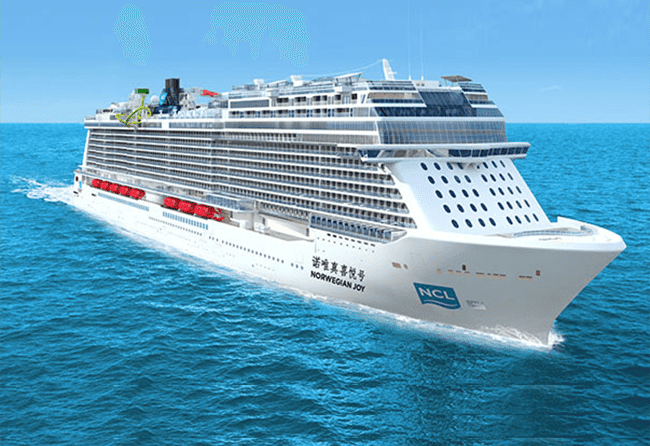 “We are carefully designing every element of Norwegian Joy, from her VIP accommodations to gourmet dining venues, outstanding recreation and entertainment choices and family-friendly features, to create a First Class at Sea experience that is completely focused on exceeding the expectations of our Chinese guests,” said NCLH China President David Herrera.

In addition to the ceremony, Norwegian Cruise Line also announced the appointment of David Herrera as President, Norwegian Cruise Line Holdings China. Previously Senior Vice President Strategy and Business Development for NCLH, David will assume new responsibilities for the sales, marketing, public relations and operations for all three brands within the NCLH portfolio in his new role. To lead the launch efforts for Norwegian Joy, Mr. Herrera, his wife Patty and their three young sons will be relocating to Shanghai this summer.

“David is building an incredible team of talented individuals in China who are committed to making the launch of Norwegian Joy a resounding success, and that dedication starts at the top,” said Harry Sommer, NCLH executive vice president for International Business and Operations. “It was abundantly clear that David’s involvement in our China efforts since 2012, as well as his enthusiasm and passion, made him the right person to lead the team on the ground in Shanghai and we are so pleased to have him in this new role.”

Home porting in Shanghai & Tianjin (Beijing), Norwegian Joy was designed by the team at NCL to provide First Class at Sea experiences specifically for the Chinese traveler, with onboard amenities that cater to the unique vacation desires of Chinese guests. Built at MEYER WERFT in Papenburg, Germany, the ship features German precision engineering to the highest possible standard, all while offering superior customization for the culture and preferences of Chinese guests along with the exciting and innovative features found on NCL’s most recent vessels.

“This steel block for Norwegian Joy marks another milestone of our successful partnership with Norwegian Cruise Line,” said Bernard Meyer, Managing Director of MEYER WERFT. “We are thrilled to build a totally new ship which is designed for the fast growing Chinese market and will be delivered in just 12 months.”

Norwegian Joy’s experiences include a multitude of VIP accommodations, from exclusive suite complex The Haven by Norwegian®, an all-new Concierge category and the most family-friendly stateroom options in the fleet; along with a technology-driven interactive Galaxy Pavilion outfitted with bumper cars, Oculus Rift virtual reality; car racing simulators and much more.

The ship’s top decks will feature the only race track at sea and laser tag, along with two waterslides and a serene open space for relaxation and renewal. Norwegian Joy will also offer international luxury shopping boutiques with renowned global luxury brands, in fashion, jewelry and electronics.