Norwegian Cruise Line took delivery today of the line’s largest ship to date, the 164,600 gross ton Norwegian Escape, from MEYER WERFT during a ceremony in Bremerhaven, Germany, after a building period of only 18 months. Norwegian Escape is the first ship in the company’s new Breakaway Plus Class. Following delivery today, the ship sets sail for Hamburg for the start of her European inaugural festivities. After a two-night stop in Southampton, Norwegian Escape will make the crossing to her year-round homeport of Miami on October 29. The ship will be christened in Miami on November 9.

“Norwegian Escape’s arrival marks a true evolution for our brand—we’ve capitalized on the best of our Breakaway Class ships and taken freedom and flexibility to the next level with this incredible new ship,” said Andy Stuart, Norwegian Cruise Line’s president and chief operating officer. “Once again, the team at MEYER WERFT, along with our new build and operations teams, and all of the ship’s officers and crew have done a remarkable job and we cannot wait to welcome guests on board this spectacular new vessel.”

“We are thrilled to deliver the first in Norwegian Cruise Line’s Breakaway Plus class,” said Bernard Meyer, managing partner with MEYER WERFT. “Norwegian Escape is the newest and most advanced cruise vessel on the seas and we are proud of the team that worked diligently to design and build her.” 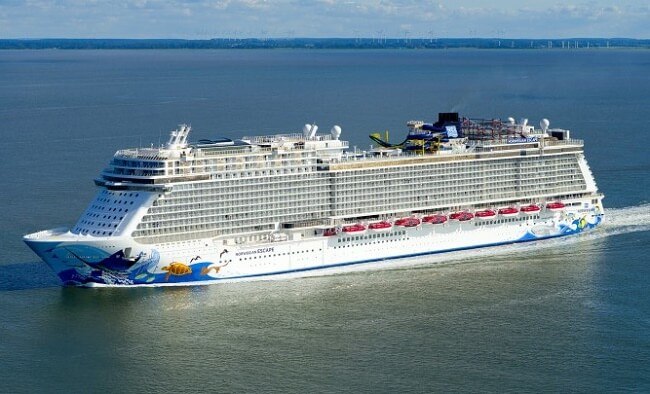 Norwegian Escape’s dining and entertainment will include outposts of several popular land-based outlets, including the first-ever floating Jimmy Buffett’s Margaritaville restaurant and 5 O’Clock Somewhere Bar, a music venue and outdoor bar on The Waterfront that will feature live nightly performances. James Beard Award-Winning Iron Chef Jose Garces will have two concepts onboard, a Latin seafood specialty restaurant and Pincho Tapas Bar, while Miami-based The Pubbelly Restaurant Group will develop the menu for the Food Republic, an upscale food emporium. The District Brew House, a hip, urban craft beer hall featuring an exclusive partnership with Miami’s own Wynwood Brewing Company, will serve up more than 24 draft beers while The Cellars, A Michael Mondavi Family Wine Bar, features an array of immersive wine experiences, focusing on tasting, education, and the enjoyment of wine. Norwegian Escape will also feature Miami’s oldest and most legendary bar, Tobacco Road.

Continuing with Norwegian’s commitment to excellence in entertainment, Norwegian Escape will feature two Tony Award-winning Broadway musicals headlining in the Escape Theater: After Midnight, the smash-hit musical that combines the big-band songs of Duke Ellington and the best dancing from Broadway; and Million Dollar Quartet, the smash-hit musical inspired by the famed recording session that brought together rock ‘n’ roll icons Elvis Presley, Johnny Cash, Jerry Lee Lewis and Carl Perkins. In a new concept exclusive to Norwegian Escape, the Supper Club has been re-imagined for an unforgettable dinner and show. For The Record: The Brat Pack™ is a critically acclaimed Hollywood night that celebrates classic soundtracks of motion picture masters in a one-of-a kind 360° post-modern cabaret.

The ship will feature the largest ropes course at sea, a three-story multiplex of heart-pounding challenges complete with two planks and five Sky Rails, zip tracks that allow guests to soar through the air. Norwegian Escape’s Aqua Park will be the largest at sea and includes a new Aqua Racer slide. Adding to the family fun, Norwegian Escape will also feature an expanded Kids’ Aqua Park, along with the line’s first dedicated nursery for young cruisers two and under.

Accommodations include the company’s largest signature luxury ship–within-a-ship complex: The Haven by Norwegian; along with Studios, designed and priced for solo travelers; and many options for families, multi-generational groups, spa enthusiasts and more.