You are here: Home › Shipping News › Norwegian Breakaway Debuts As The Biggest Ship To Sail From The Big Easy
TwitterFacebookLinkedInPinterestBuffer

Norwegian Cruise Line, the innovator in global cruise travel, returns to New Orleans introducing Norwegian Breakaway to the Big Easy with five to 11-day cruises to the Caribbean.

At 1,068 feet and 145,655 gross register tons, the recently renovated Norwegian Breakaway is the largest cruise ship to homeport in the city of New Orleans, as well as the youngest in port this season. The namesake ship of the Breakaway class offers guests the freedom and flexibility to design their dream vacation at sea with no assigned dining and entertainment times, 25 dining options, 22 bars and lounges, a comprehensive water park featuring the fastest waterslide at sea, one of the largest ropes courses of any ship and an entertainment program that mirrors the vibrancy of the Big Easy. 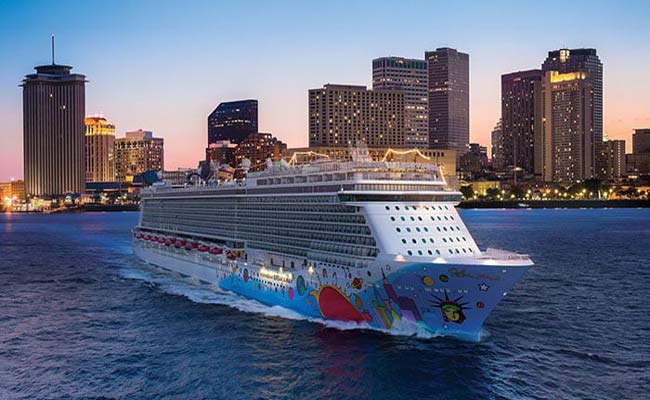 “We are excited to introduce Norwegian Breakaway to New Orleans, providing our guests with another premium destination to cruise from when sailing to the Caribbean,” said Andy Stuart, president and chief executive officer of Norwegian Cruise Line. “New Orleans is well known for its lively music, culinary scene and entertainment, a perfect complement to the high-caliber experiences guests will discover on Norwegian Breakaway.”

Following her renovation in May 2018, Norwegian Breakaway debuted refreshed staterooms and public areas and introduced a new bar and lounge concept to the fleet with Syd Norman’s Pour House. Modeled after influential rock houses such as CBGB’s, The Rainbow and The Fillmore, Syd Norman’s is a tribute to the grandfather of “Rock of Ages” playwright Chris D’Arenso and features vintage décor, diner-style seating, signature cocktails and an unforgettable playlist of classic rock from the late 1960s to 1980s. Additional entertainment options on board include the Tony Award®-nominated Rock of Ages, Burn the Floor and Cirque Dreams Jungle Fantasy, all of which attest to the company’s commitment to providing world-class entertainment at sea.

“Norwegian Cruise Line is a valued cruise line partner and we are thrilled to welcome Norwegian Breakaway as the largest cruise ship ever to sail from Port NOLA,” said Brandy D. Christian, Port of New Orleans president and chief executive officer. “With our commitment to high-level service and the Crescent City’s vibrant energy, we look forward to offering Norwegian Cruise Line passengers a memorable cruise experience as they begin and end their vacations in our unique American city.”

Built in 2013 at the Meyer Werft Dockyard in Papenburg, Germany, Norwegian Breakaway is the 11th ship in the modern Norwegian fleet, and the first, and namesake, of Norwegian’s Breakaway class. This award-winning ship introduced many of Norwegian’s latest concepts, including The Waterfront, a quarter-mile-long oceanfront promenade, and the interactive bar and performance venue Syd Norman’s Pour House, modeled after the influential rock houses of the 60s, 70s and 80s. Other prominent attractions on the ship include one of the largest ropes courses at sea, five multi-story water slides and Broadway entertainment, such as Rock of Ages and Burn the Floor. The ship features 25 dining options, 22 bars and lounges, children’s program for a variety of ages, accommodations of all kinds, from Studios for solo travelers to The Haven by Norwegian®, a private enclave complete with luxurious suites, dedicated pool and restaurant, concierge service and personal butlers.