Norwegian Cruise Line and MEYER WERFT celebrated the keel laying of Norwegian Bliss at the yard’s state of the art facility in Papenburg, Germany on 24th May. During the ceremony, the first of 90 blocks that will comprise the 167,800 gross ton vessel was lifted into the covered building hall, officially marking the start of the ship’s assembly. Norwegian Bliss is due for delivery in April 2018 and will be the first cruise ship custom built with features and amenities for the ultimate Alaska cruise experience.

Andy Stuart, Norwegian Cruise Line’s president and chief executive officer, was present in the hall and laid the traditional “lucky coin”, etched with the outline of the ship’s signature hull designed by wildlife artist Wyland, before the first block was lowered into place. 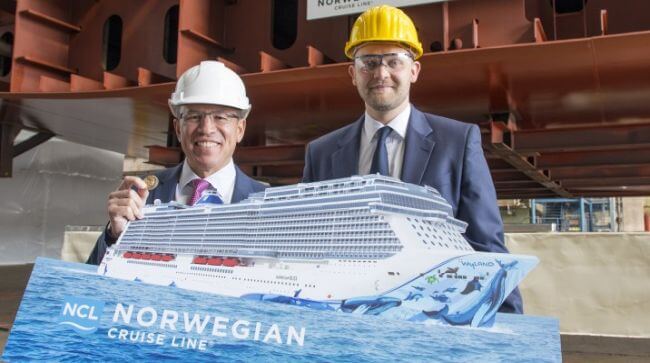 “We are overjoyed to celebrate the keel laying of Norwegian Bliss, our sixteenth ship and sure to be our most innovative ship to date,” Stuart said. “We have seen overwhelming anticipation and excitement from our guests and travel partners for Norwegian Bliss, from her awe-inspiring custom-designed spaces like her observation lounges to her elegant suites in The Haven by Norwegian®, and we are all thrilled to see this magnificent ship begin to come to life with the craftsmanship, precision and cutting edge technology that MEYER WERFT consistently delivers.”

The third ship in the line’s Breakaway-Plus class, Norwegian Bliss will accommodate 4,000 guests and will be the 12th ship in the Norwegian Cruise Line fleet to be built by MEYER WERFT.

“We are very happy to celebrate the start of the block assembly for another newbuild with Norwegian Cruise Line. This ship will be another milestone in our collaboration to create most efficient and innovative cruise ships”, said Tim Meyer, Managing Director of MEYER WERFT.

During her inaugural summer 2018 season, Norwegian Bliss will sail weekly seven-day Alaska cruises each Saturday from the recently expanded Pier 66 Cruise Terminal in Seattle, offering guests the premier way to see America’s last frontier, while also providing all of the innovative features, entertainment, signature dining and onboard experiences that Norwegian Cruise Line is known for around the globe. The ship’s itinerary will feature calls in Ketchikan, Juneau, Skagway and Victoria, British Columbia, along with scenic glacier cruising. Norwegian Bliss will sail her inaugural Winter season beginning in November 2018, sailing seven-day Eastern Caribbean cruises each Saturday from PortMiami, featuring calls in St. Thomas, US Virgin Islands; Tortola, British Virgin Islands and Nassau, Bahamas.

Norwegian Bliss’ curated design will offer guests the freedom and flexibility to “Imagine Bliss” and create their ideal experience at sea, with a wide variety of accommodations including luxurious suites in The Haven by Norwegian®, Studio staterooms for solo travelers with virtual ocean views, and new connecting staterooms ideal for large groups and families traveling together. Norwegian Bliss will also feature two observation lounges, including one exclusive to guests of The Haven®, perfect for whale watching in Alaska or taking in sunsets in the Caribbean.

Norwegian Cruise Line will take its award-winning entertainment programming to the next level aboard Norwegian Bliss, bringing the best of Broadway to sea, with the 2006 Tony Award® winner for “Best Musical,” Jersey Boys, and a completely new and original show created by Tony Award®-winning director and choreographer Warren Carlyle, headlining on the ship’s main stage, the Bliss Theater.

Continuing its tradition of featuring original artwork on its ships’ hulls, Norwegian Cruise Line has commissioned Wyland, one of the world’s premier marine life artists, to design the hull art for Norwegian Bliss; the artwork will feature images of humpback whales, found in every ocean around the world. The ship’s hull will serve as a large canvas to showcase the importance of conservation and ocean preservation.