You are here: Home › Shipping News › Norbulk First To Convert Onboard Refrigeration Plant To Run On R407F
TwitterFacebookLinkedInPinterestBuffer

Oceanic Technical Solutions has successfully converted all refrigeration and reefer plants onboard a Norbulk managed refrigerated cargo ship to run on refrigerant R407F.

The conversion, which follows the January 2015 entry into force of F-Gas rules banning the entire use of R22 refrigerant on all European-flagged vessels, is believed to be the shipping industry’s first ever marine refrigerant conversion to the more environmentally-acceptable R407F. 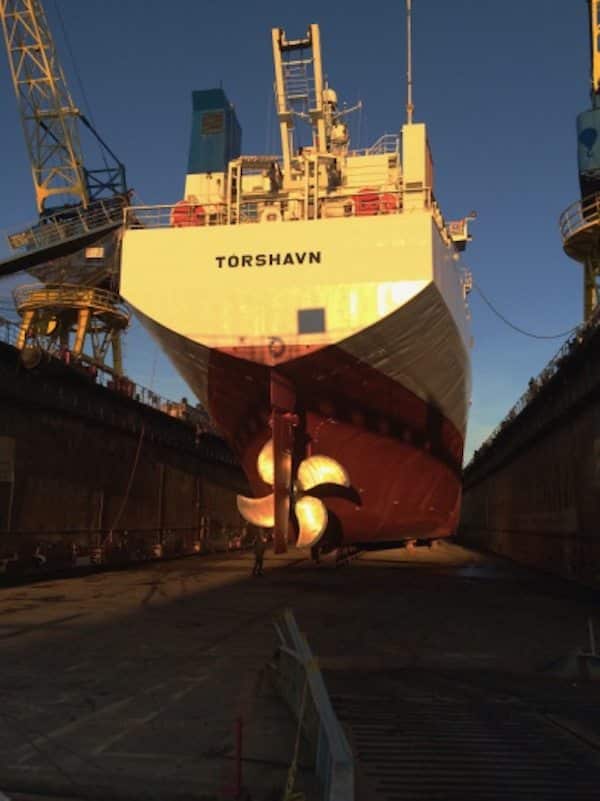 Prior to January 2015, operators were still able to purchase recycled R22, but the ozone-depleting gas and other Hydrochlorofluorocarbons (HCFCs) are now completely outlawed across Europe. 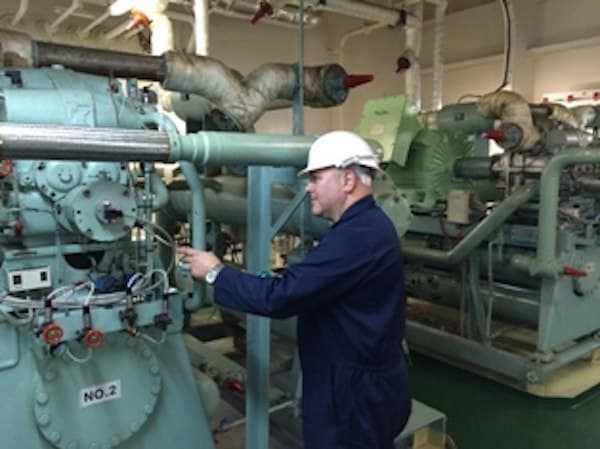 John Taylor, Fleet Manager, Norbulk, said: “With our commitment to operating ships in full compliance with all recognised international and national regulations, the success of the refrigerant retrofit has shown the industry that there is a commercially viable alternative that has a reduced impact on the environment other than the Ozone-depleting gasses formerly used in marine refrigeration plants.

“Since the conversion, we have reduced further the impact our operations have on the environment, without affecting cargo cooling performance,” confirmed Taylor. “R407F refrigerant has very similar attributes to R22 but without damaging the environment.”

During a scheduled drydocking at a shiprepair yard in Klaipeda, Lithuania, the 6120dwt reefer’s refrigeration plant aboard was shut down and the entire charge of R22 recovered. Three refrigerant recovery units were used to transfer the gas to dedicated refrigerant recovery receivers.

However, before the plant could be charged with the new gas, Oceanic’s conversion team, led by Technical Director Dave Lloyd, pressure tested the plant for leaks, fitted new gaskets, seals and oil filters, inspected and made leak-tight all pipe work and installed a fixed leak detection system – now a mandatory requirement under the F-gas Regulation (EU) No 517/2014 for refrigerant plants of a certain size – with sensors mounted at valve stations in the machinery room and each of the four cargo holds. The refrigeration plant was then purged with nitrogen and oil systems were flushed with fresh Polyolester oil to remove the existing mineral oil content.

After charging the system with R407F, the system was operated at full capacity for two days, with the Oceanic team monitoring pressure and temperature parameters before the vessel received her first cargo of frozen fish.

Robert Chesters, Managing Director, Oceanic Technical Solutions, said: “The ban means that shipowners looking to operate under a European flag or indeed reflag their vessels in Europe must now convert their HVAC and refrigeration systems to run on next generation refrigerants, of which there are hundreds. Based on the type of direct expansion plant in operation aboard and the cooling capacity required, we recommended Norbulk use R407F as it closely matches the cooling capacity, oil carrying properties and operating parameters of R22.

“While the gas is not commonly used in the maritime industry, R407F has a global warming potential (GWP) of 1800, far lower than the legislative cut-off point of 2500. All replacements are blends made up of several different components but if a leak occurs in certain parts of the system fractionation can occur, affecting the performance and stability of the refrigerant. R407F is a blend of just three refrigerants – R32, R125 and R134a.”

R407F is also seen as a suitable replacement for R404A and R507 and other refrigerants with a GWP above 2500 that will be affected by new F-Gas Regulation (EU) No 517/2014 due to enter into force in 2020. While it will not be illegal to have systems that run on these gases, servicing them and topping them up with virgin refrigerant will be.

“While each refrigeration plant and the appropriate refrigerant should be evaluated on a case-by-case basis, the success of the Norbulk refrigerant conversion has shown that R407F is a viable and environmentally-friendly alternative to existing high GWP refrigerants,” said Chesters.

Based on the success of the conversion Oceanic Technical Solutions is now evaluating the refrigeration plant aboard other Norbulk vessels for conversion later this year.

Infographic: How Large Is The Harmony Of The Seas – World’s Largest Cruise Ship?

BIMCO Supports Push To Step Up Fight Against Maritime Corruption
Want to share your tips and advice? Got questions? Visit the community forum to ask questions, get answers, meet people, and share your tips!